Firstly Thanks for your comments. Bubble many of the pickers were Punjabi Indians who live in BOP now and work in the Kiwifruit Industry. Some have done pruning here for us.
Unfortunately the packing did not go well. Even more fruit was rejected than we feared. Such a dreadful waste. 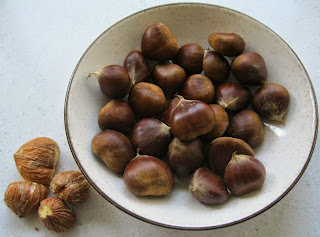 Do you like chestnuts? We do and have one tree. We are using them more this year in various ways. I have discovered dropping half a dozen peeled ones in with a roast dinner is delicious. I have also been putting a few into any sort of soup I make. When we were kids we sometimes got given some and then we pricked them and held them on a metal hearth shovel in an open fore till they cracked open. They taste  a bit like very dry Kumara.
****** 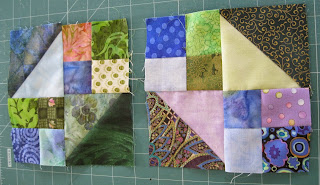 I am back sewing now after having to take time out with a very sore eye. The optician found I had an ulcer on the eyeball. It was very, very painful but is better now. It healed really quickly once I  applied the prescribed drops.
It meant I couldn't see to use the computer or sew or drive etc. so I had a couple of miserable days and sleepless nights. All good again now though.

I am making a small quilt because I had a lot of small unusual sized square blocks cut for my last flower quilt. They were going to be in a final border but I decided it looked less busy without, so had the blocks left.  I did the maths to find what size half square triangles would match a 4 patch made of the small squares and am now almost finished enough of the above blocks for a quilt top. ( Jacob's ladder pattern. )  I will show the top in the next post.

I have also been knitting each evening. This is a little jersey which is now finished and being sewn up. I hate the sewing up part. I have also finished this little 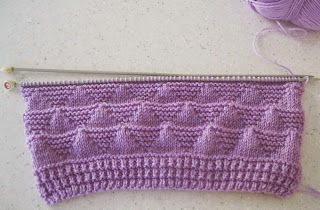 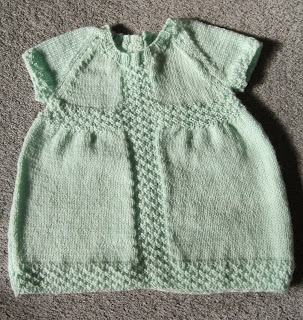 dress or tunic top. Both patterns came from a Patons Book 1101.

I have also finished a collection of booties and  beanies, in varying sizes and colours and types of wool. I liked all the wools and combinations of mohair, possum, alpaca  or angora except one garment I made with bamboo. It was not nice to knit and feels cold so I won't use that again. I think wool or a combination of wool and other fibres is best. I never use acrylic. 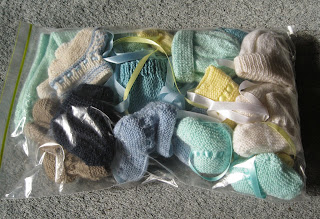 My favourite yarn, so far is a Zealana AIR lace weight . It is probably 2ply, and one ball was just 10gms - enough for a pair of booties.
Posted by Ali Honey at 10:38 AM

That's good your eye is OK...Your knitting is beautiful...love the little dress.
We used to have big fields full of chestnut trees where i grew up...very nice in a roast! :)

An ulcer on your eyeball......ouch! Good to hear it's all right, though. The triangle knitting pattern is interesting, and the little dress and booties are sweet. Chestnuts are in the shops here now, must get some to try.

Ouch! The eye ulcer sounds painful alright - I am glad it is better. You are very clever to create the knitted items, I admire anyone who can knit (it is not my forte at all!)