Stitching on a Felt Embroidered Ball. 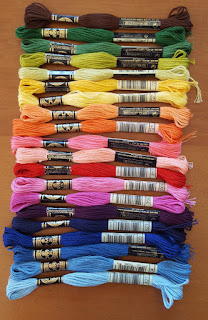 Recently I used a voucher I had to get  some new embroidery threads to add to my collection.
They look amazing together don't they.

Today its not pleasant outside so I have been working on my latest felt ball. # 27 that I have made. It is for Grandson # 2.

This photo shows the stage where I have sewn all 12 pentagons together and have wound the batting  strip stuffing around a bottle top rattle in the middle and inserted  it into the felt pentagon casing. The final seams have to be sewn on the outside . So that final stitching doesn't show and to add interest, I chain stitch around each pentagon edge before working on the 12 mofits. 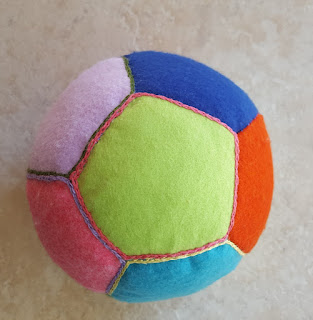 Here you can see 6 coloured pentagons 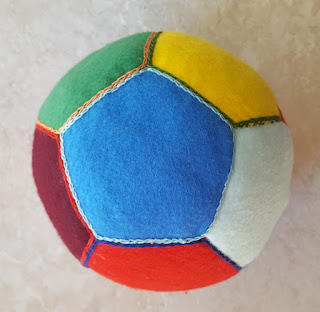 Here you can see the other 6. 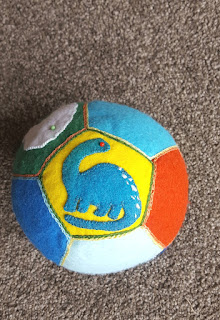 I hadn't used a dinosaur motif before. Here it has a red pin stuck in for it's eye. I doubt I can sew an eye to look as good but will try.
Next I did a Capital C for Grandson Christian name. 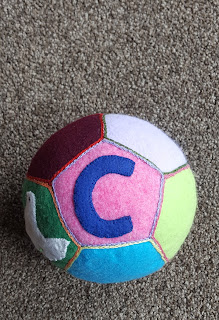 In both photos you can see the white where I have started a chicken. That is 3 of the 12 picture motifs taken care of. I try to make every ball individual to each child.so will make sure none of the motifs that appear on Grandson # 1's ball get put on this one.

I make all the balls the same size and keep cardboard patterns of all the motifs I make up. I also have a notebook that I started back at ball 1 stage, 18 plus years ago in which I have recorded the detail of each ball; what was on it, who it was for and the date.
I have just been looking at that notebook.
Balls have been made for ( mostly babies ) named :Noah; Tautahi; Amy; James; Jessica; Joshua; Nancy; Jackson; another James; Alex; Aleisha; Poppy; Chloe; George; Scott; Ella; and Lane.
3 have been made for adults named Pauline , Annie and  Penny. One was given to a fund raising auction.  I still have 3 here the 1st ,2nd and another for playing with at my house.
Not all balls stayed in NZ. Balls have ended up in Australia ( 2) ; UK and Alaska.
My eye sight is not nearly as good these days so the early balls were probably neater..
Right, back to the needle and thread.

I’m sure Gandson #2 will love his ball. The dinosaur turned out so very well. It must be great looking back at the details of all the others. I bet you’re glad you decided to start that notebook when you did.

That's beautiful! As is your view - I'm so envious!

I too well remember the day you came to visit - 17 July 2011! Very auspicious for us, and it was lovely to meet you. I remember you almost every day because of the mug coasters you kindly brought us. Nicholas and Louisa (the Edinburgh grandchildren) play with them a lot - they tend to become biscuits, or features on a railway layout! May, the Unbloggable One, has also started playing with them and I'm sure that the baby, Astrid, who lives in London, will take up this habit as well. We do also use them for mugs.

Re photos being sideways: I find that if you go into Pictures on your computer and turn them there before doing anything else with them, you can THEN turn them in ... well, I use Picasa, but whatever you use... and they stay turned when you put them on a blog.