Every year since I have been a member of the Tauranga Patchwork and Quilters Group there has been an Annual Exhibition. It is quite a big group; this year at present with 90 something members; some years we have had over 100.
Lots of members will help but very few will take the responsibility. ( of running an Exhibition )-   in our group anyway, ( or taking office in the general Committee ) that is heading the Committee to organise the show.( I have been on the General  Committe the last 3 years but asked for time out this year to be OE and take a back seat. )
For our group that is usually the first hurdle. Getting someone to be Ultimately in Charge. This year someone who has done the job many times before said she would do it, cause nobody else would do it. She did have a mainly new committee. They have got to be able to work together and get along with each other. They have put on a fine show at a new venue. There is in my opinion no such thing in our area as the ideal venue. 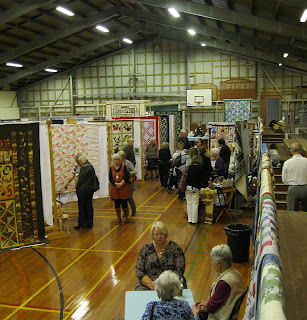 As you can see in the photos , QE Hall  is mainly used for sport and therefore has multicoloured sets of lines on the floor. It is big and airy with backboards for basketball and too many signs on the walls, both old and new. There was also construction noise outside. So you work around those things.
The pluses at this venue I can see are:-
*There was more parking space (  free ).
*There was kitchen facilities  - so we invited Save the Children to cater and make some  money . ( they had fabulous cheap homemade goodies )
*Along the right side of the area there was room to sit and eat. ( and in an area above )
* The Merchants Mall could be in the same hall around the edges, so they felt part of it.
* There was more space to exhibit.

After this weekend when it is all over for another year members will be asked to say what they think about the venue. The price to hire and rules of use were about the same as last year. Display boards had to be hired - they were included when we used Baycourt.

I am interested to know how other groups get on Holding their Exhibitions.( will you share your experiences with us? ) 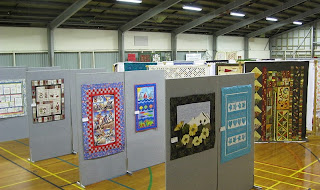 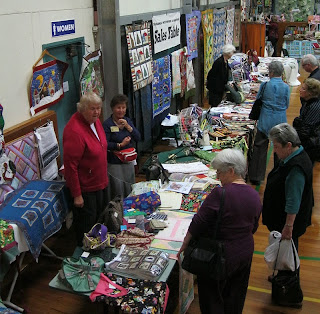 I spent a large part of yesterday helping with the Sales Table. It was a general sales table where members could sell their own work.  Last year they sold only cushion covers for the group. The year before we sold only aprons for the group. So consequently a very large number of items  for sale turned up. (Quilts big and small; aprons; table runners; dolls;  oven mitts; novelties; bags; needle cases; unfinished kits; ruler holders; fabric panels; casserole carriers and wall hangings.) ( I am sure I forgot some items on that list ) 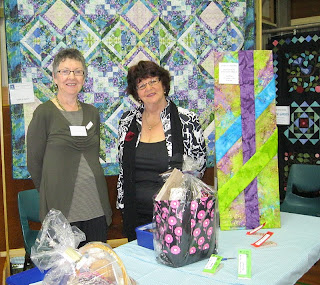 After these 2 good smiling friends had maned the raffle table I did that job for 2 hours. We has as usual a raffle quilt, seem behind in this photo. There were also 5 other $1 a ticket "goodies collections,"  which merchants donated.Some very exciting and generous prizes.
Our show was NZ $2 to get in, so most folk took some raffle tickets too.

Yes, of course there were lovely QUILTS on display. Here is Muriel's quilt  to whet your appetitie. I am back there tomorrow to work so will show more of the quilts that took my eye on Monday. 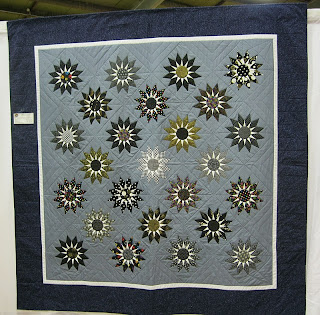 Muriel's quilt is lovely! Several years ago I was with a group which held their exhibition in a local church - it wasn't too bad, but was far from ideal.

Oh, I wish I could have been there. The quilts look wonderful.