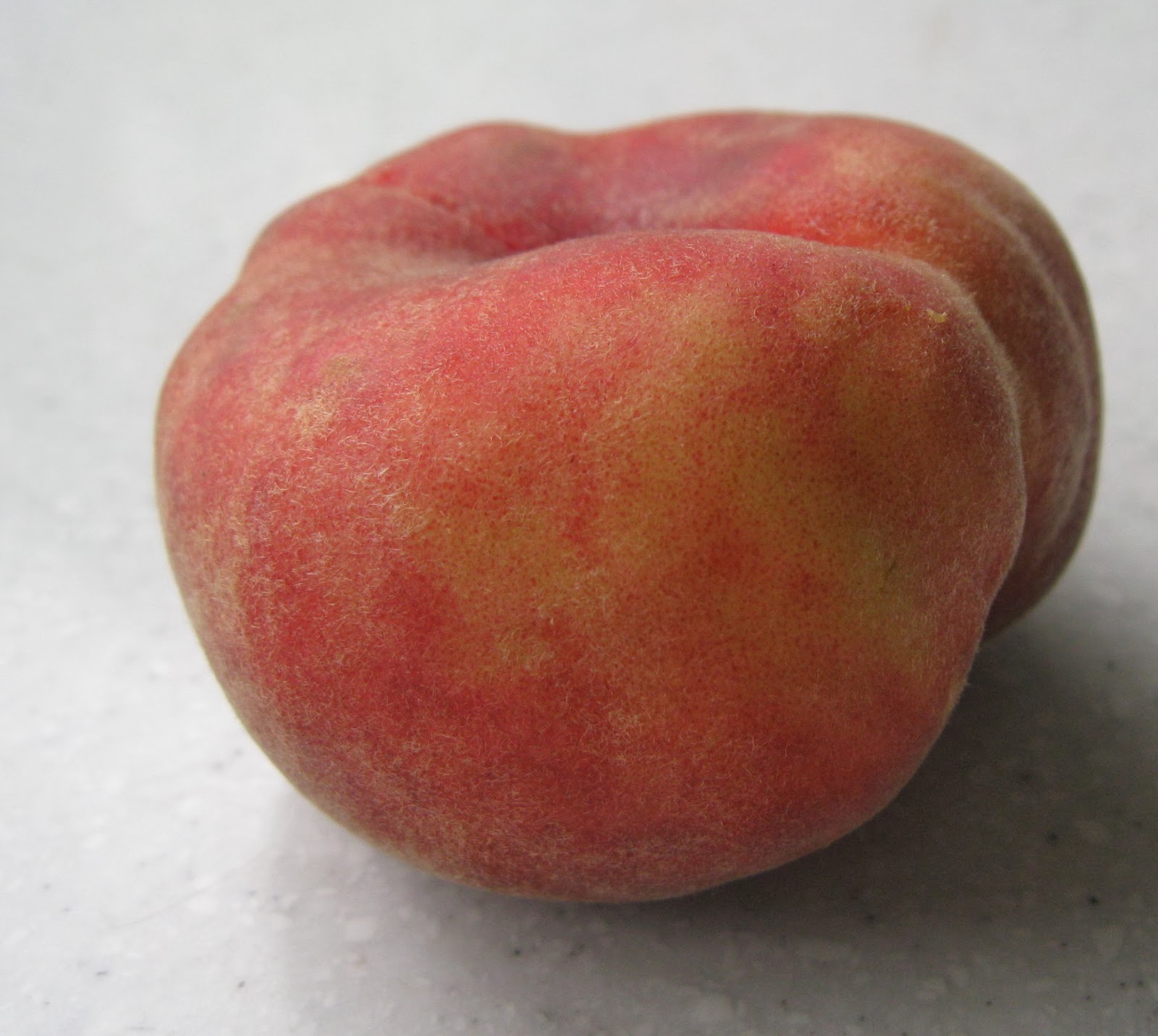 Not the prettiest fruit I've seen but very tasty all the same. Every year about this time a few flatto peaches make their way into our shops. They are the nicest peaches I know of and are grown at the bottom of the South Island ( of NZ ) and in other parts of the world. 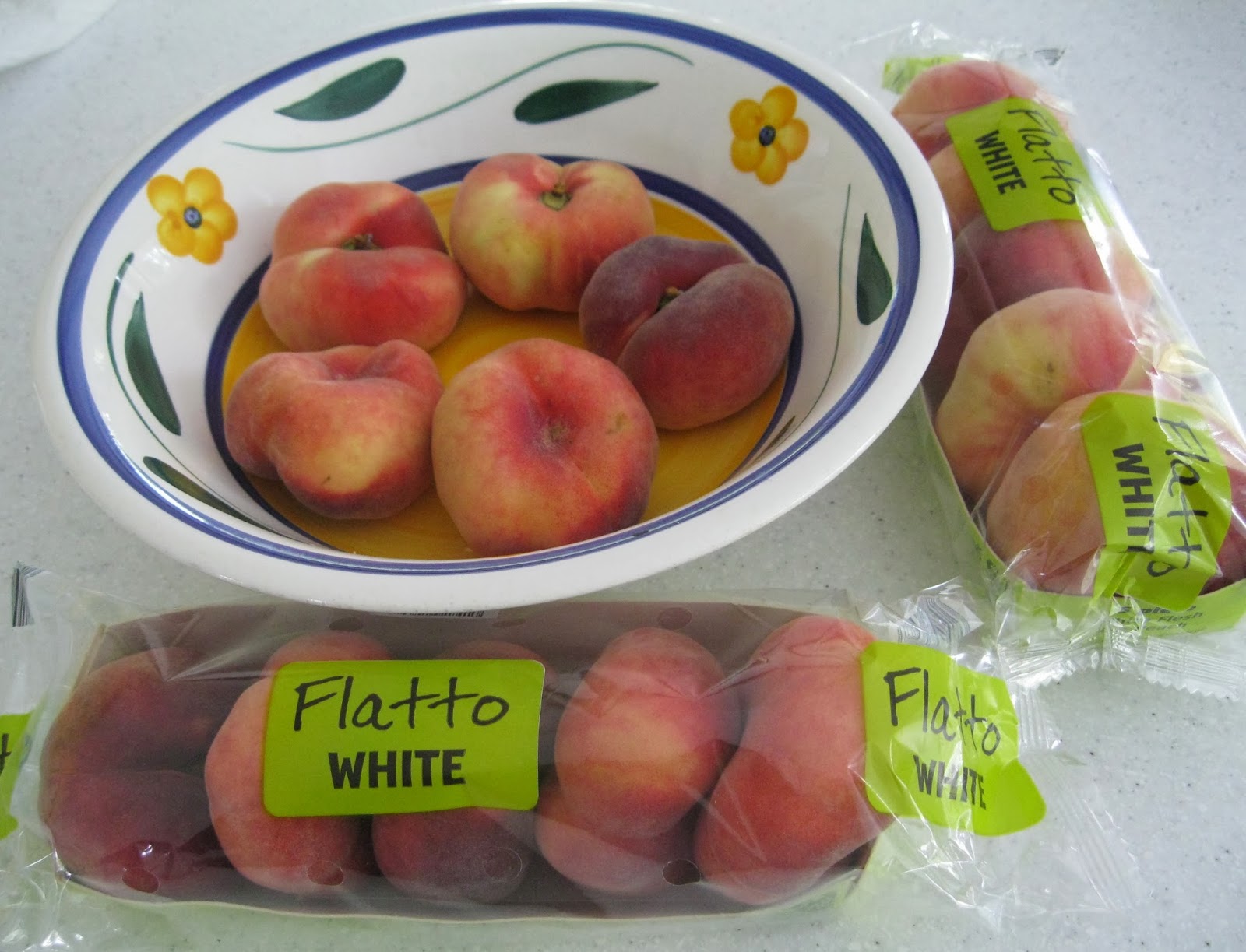 Packaged carefully 5 in a row in a little cardboard tray they cost NZ$3.99 for 5. Unfortunately 2 in one pack were bad so that was disappointing.( I have never found that other years - they came from the same growers - but I will be inspecting any future purchases of them very very carefully ) The others are being rapidly consumed as a real treat - something we don't grow ourselves. If you get the chance to try one - do.
*******
Something for nothing.
Recently I repotted these wee plants into a large terracotta pot. Look what came up from the potting mix I used as a top up. Bright yellow fungi. 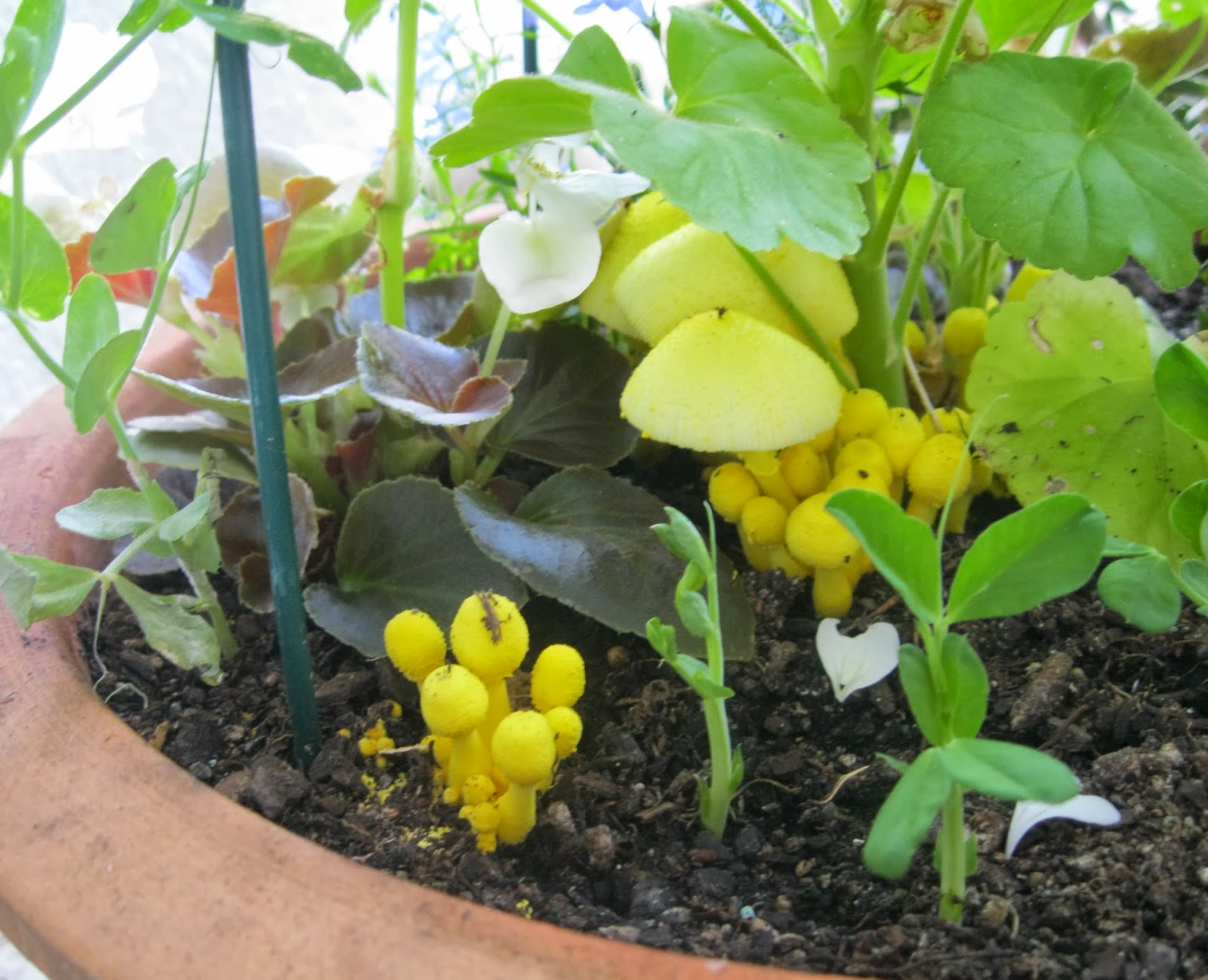 First there was one followed by clusters more. I had to hand pull them out which wasn't very pleasant. I googled them and apparently they aren't harmful to humans or the plants but they were making a take over  bid. ( I guess this time of year is mushroom time .)
******
I have just finished reading, "The Tilted World," by Tom Franklin and Beth Ann Fennelly. A light quick read . A novel about  an imaginary place called Hobnob situated beside the Mississippi River, which flooded in 1927.  I didn't know of this flood but did know that it flooded again with equally devastating results in 1993.
I have checked the facts and looked at google images and think it is pretty close to what must really have happened. I scored it 3.5 out of 5 and have to say I enjoyed it. I found out lots about levees and bootlegging and country life in 1927 America.
******

A Moral Dilemma.
I mentioned in a previous post what was going on with supermarkets in Australia. (Some Australian supermarkets - Coles and Woolworths, were taking NZ products off their range, thereby taking away choice  ) I have been researching and reading. All the Country newspapers have had articles about it. It has had TV coverage.
Then a second incident came to light when Shane Jones, a NZ politician, raised the question in Parliament ( under privilege ) - was the same supermarket chain holding NZ producers to ransom and asking for back payments for lost sales? ( it is now going to be investigated officially but results may take till the end of the year )  With only 2 supermarket chains in our country between the 2 of them suppliers get a very poor deal often making no profit at all on fresh produce - fruit and veges.

I am still working my way through all that. Reading labels on everything to see where it comes from or is packed.
I really have to prove I am serious now as yesterday in the mail I received a $15 voucher from Countdown supermarket. I will have to bin it or give it away.
Posted by Ali Honey at 3:27 PM 5 comments: 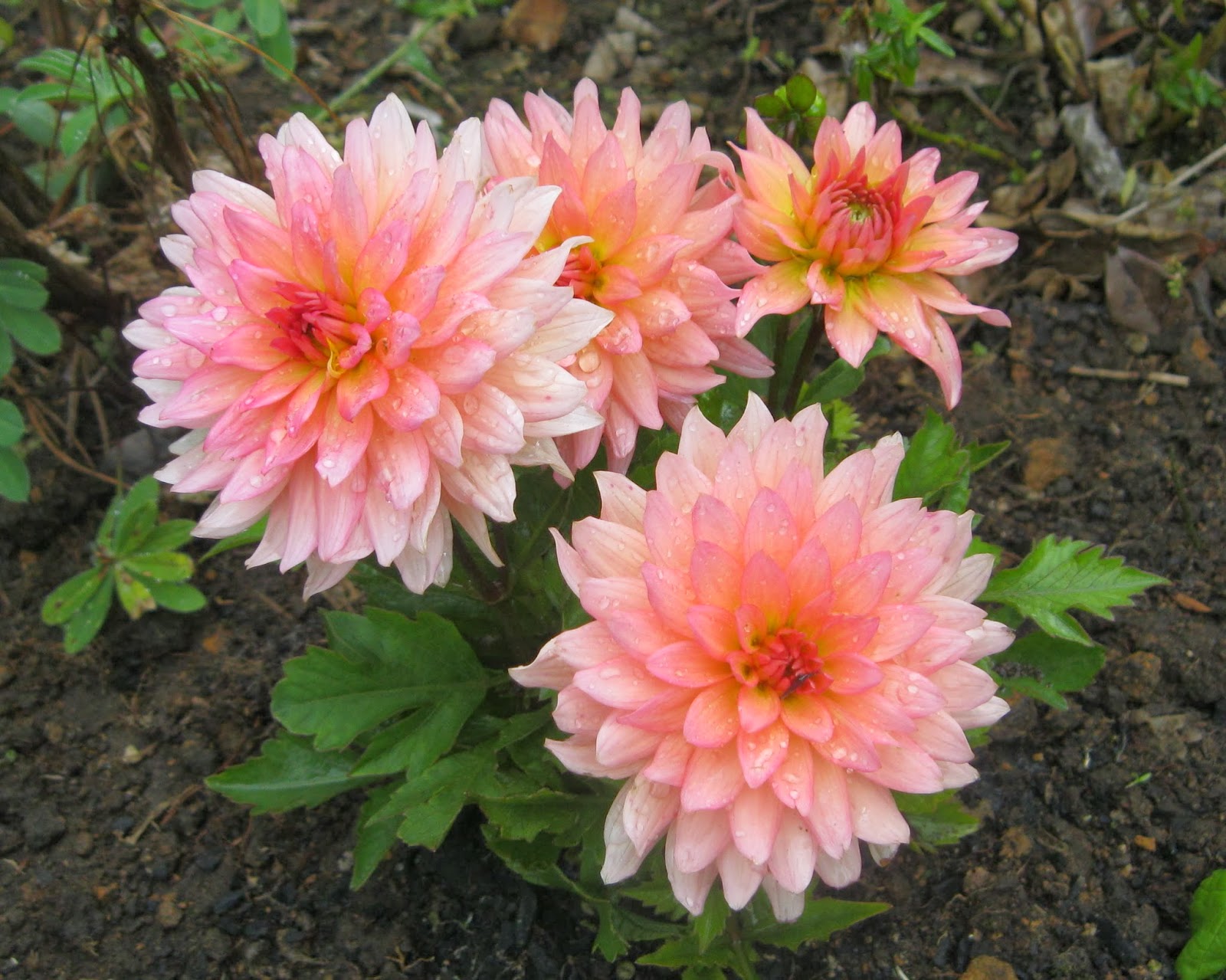 caught my eye ( and jumped into my trolley ) at the garden Centre, along with a collarette type in pale lemon. 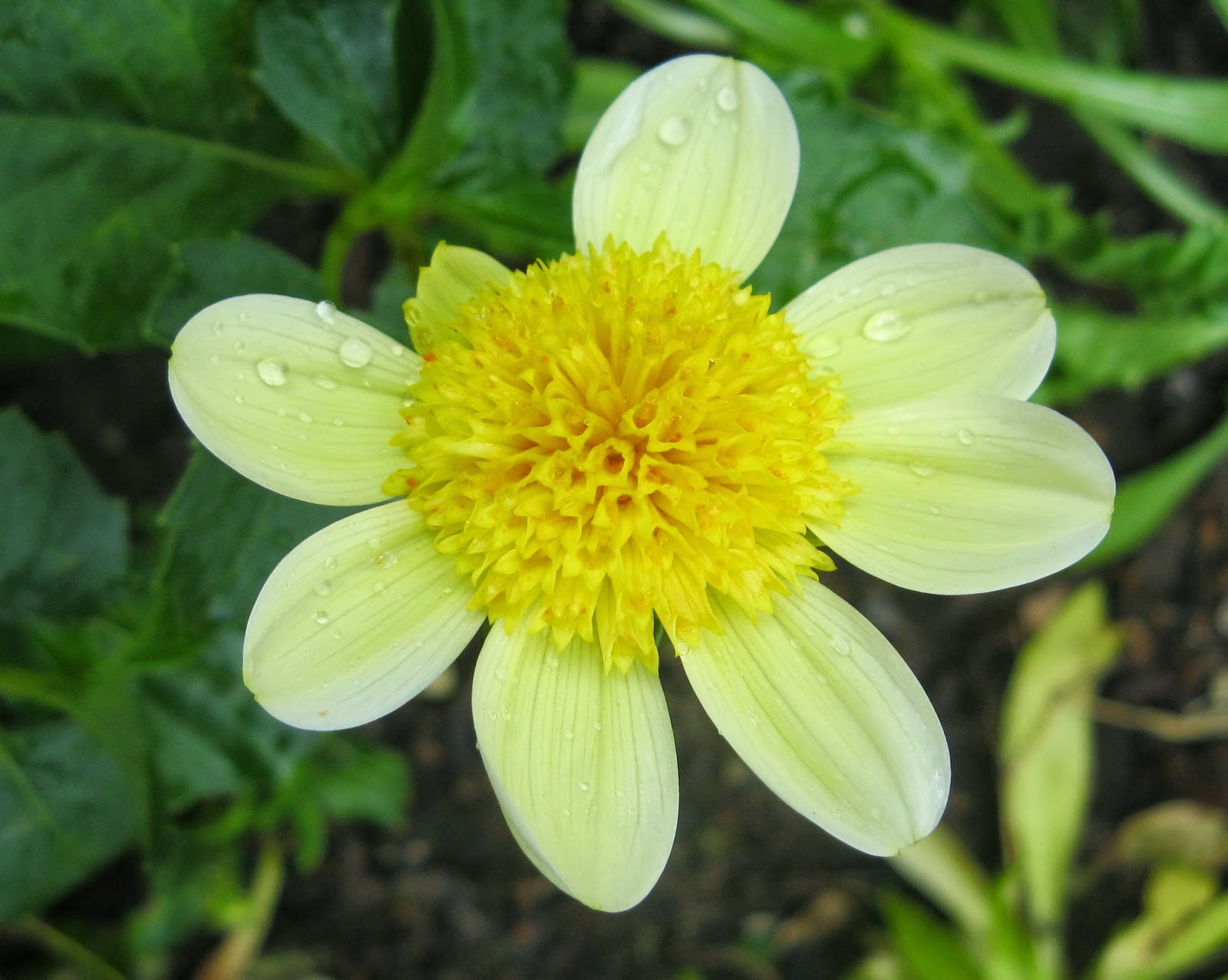 This is the area where we pulled out a huge old flax plant late last year. It is filling in nicely and is quite bright. 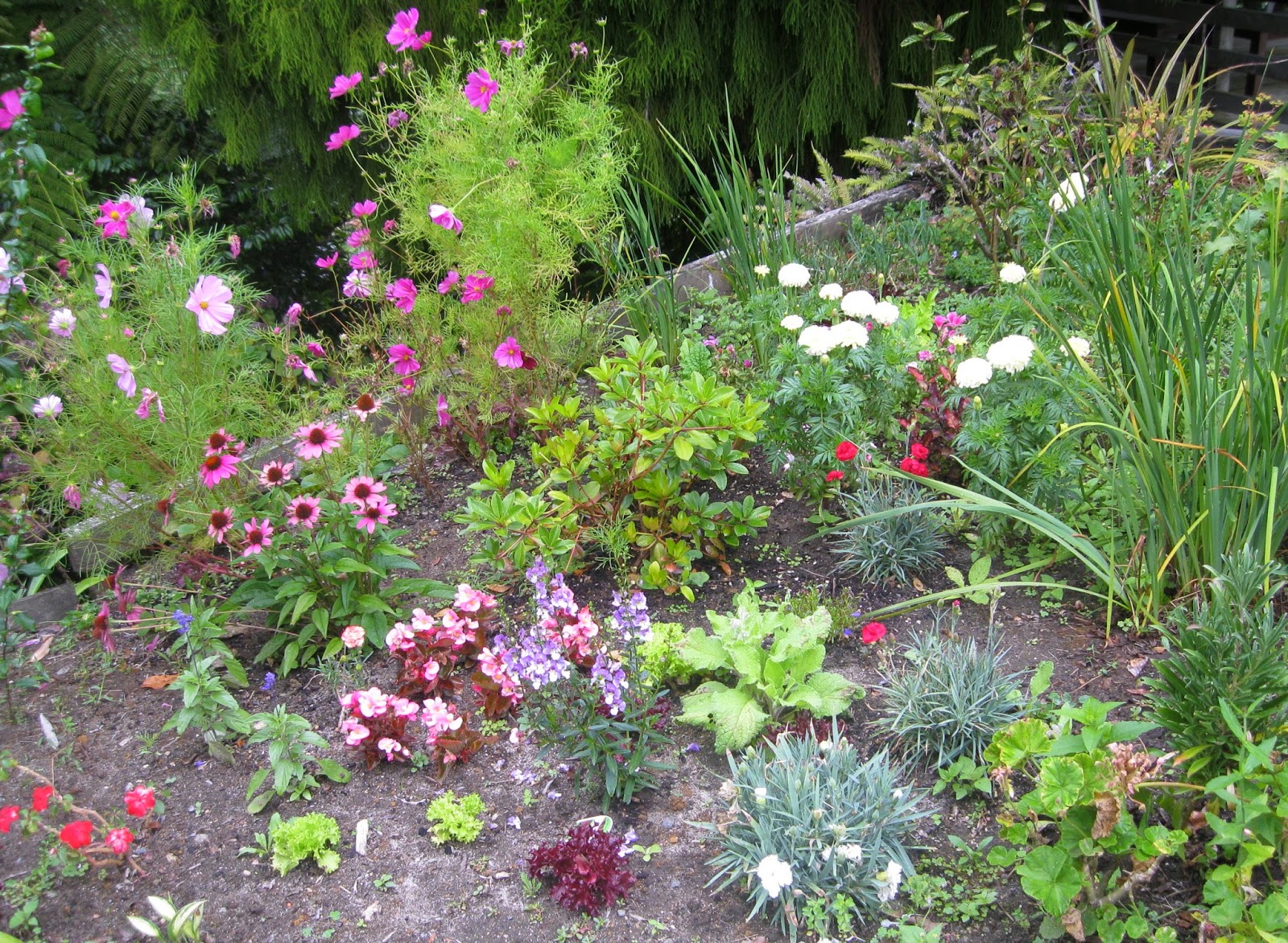 The little patch of new grass eventually grew and is very bright green. 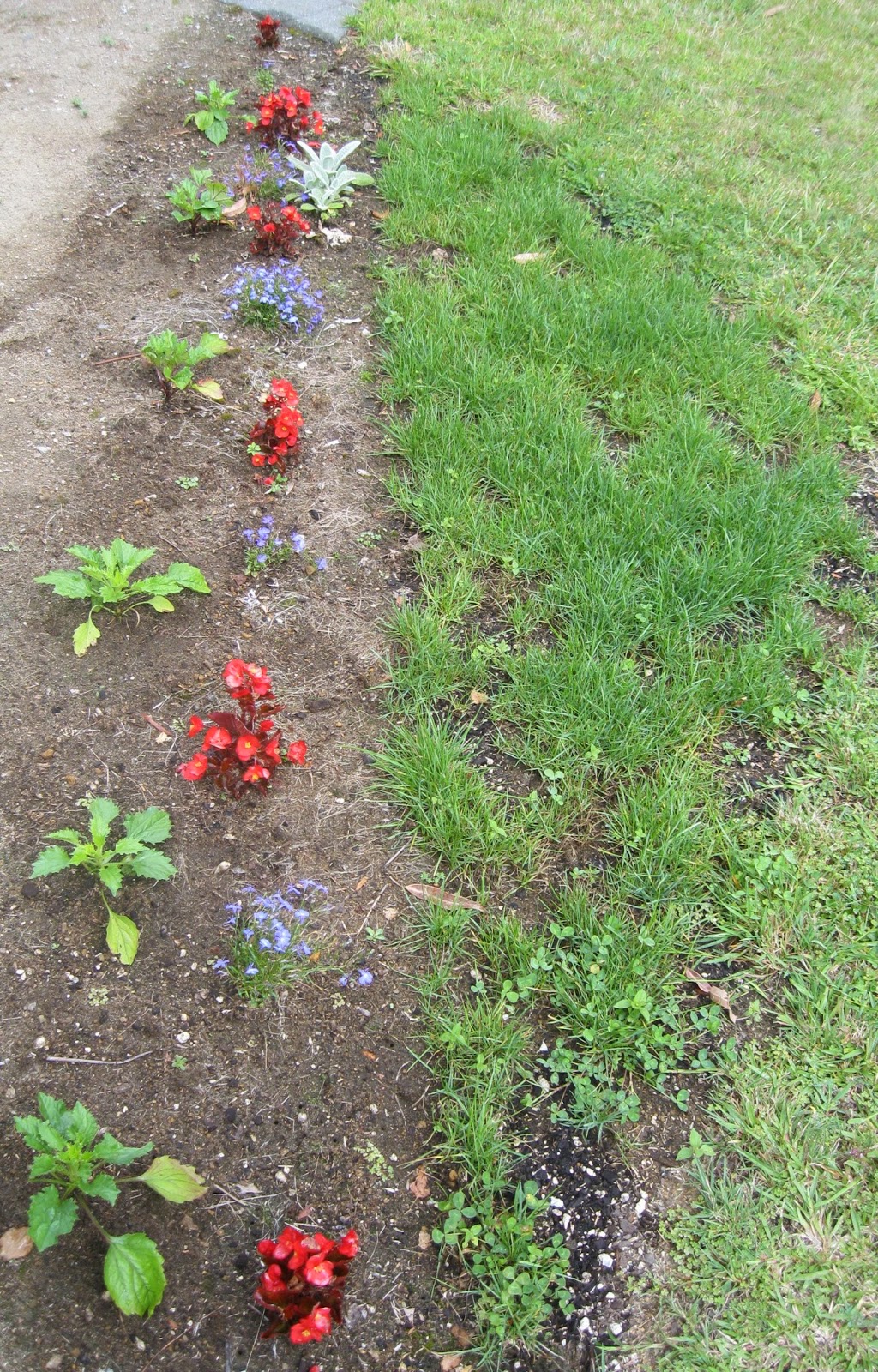 Inside the house I have been making attempts to use some surplus tomatoes. 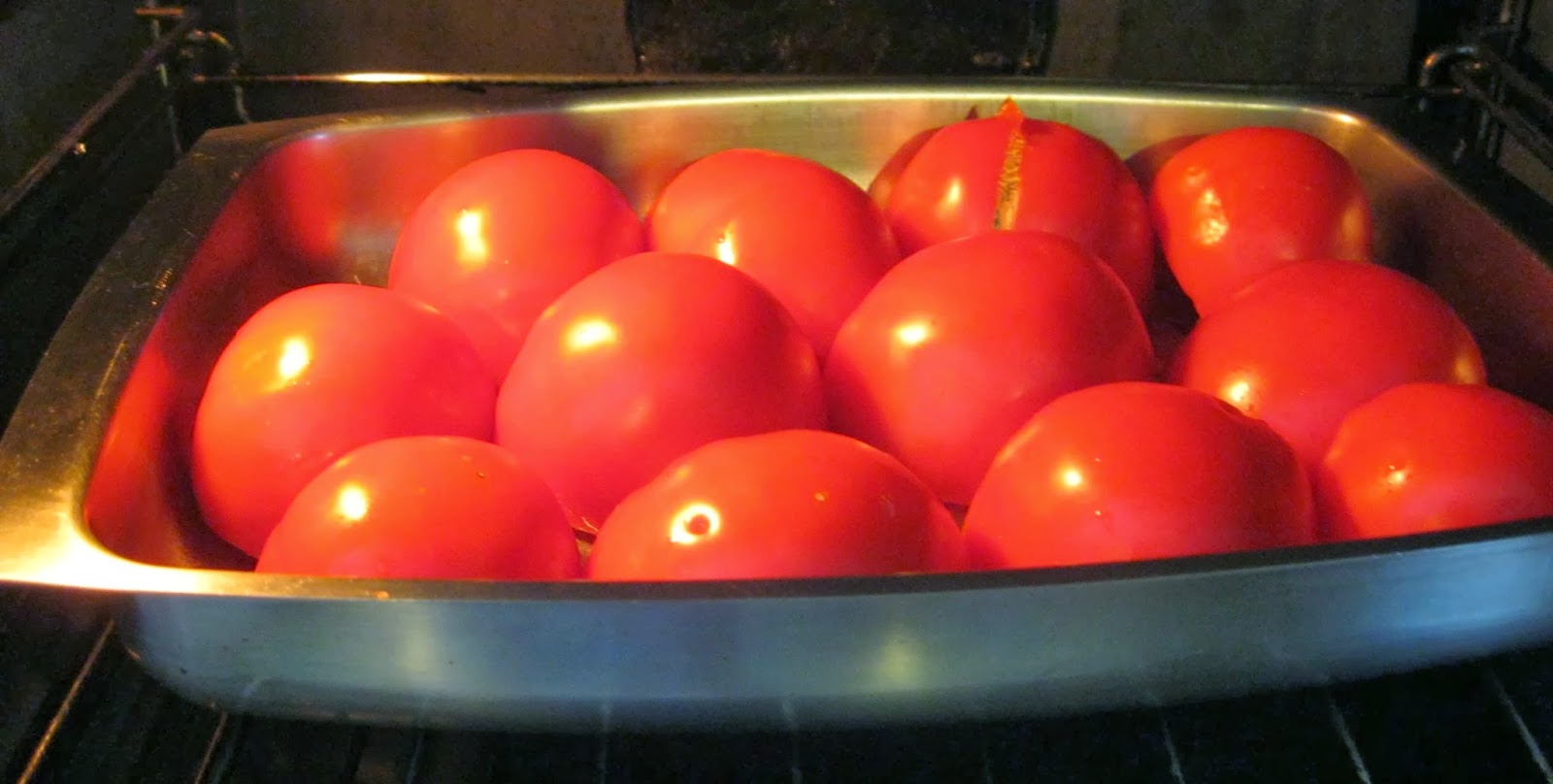 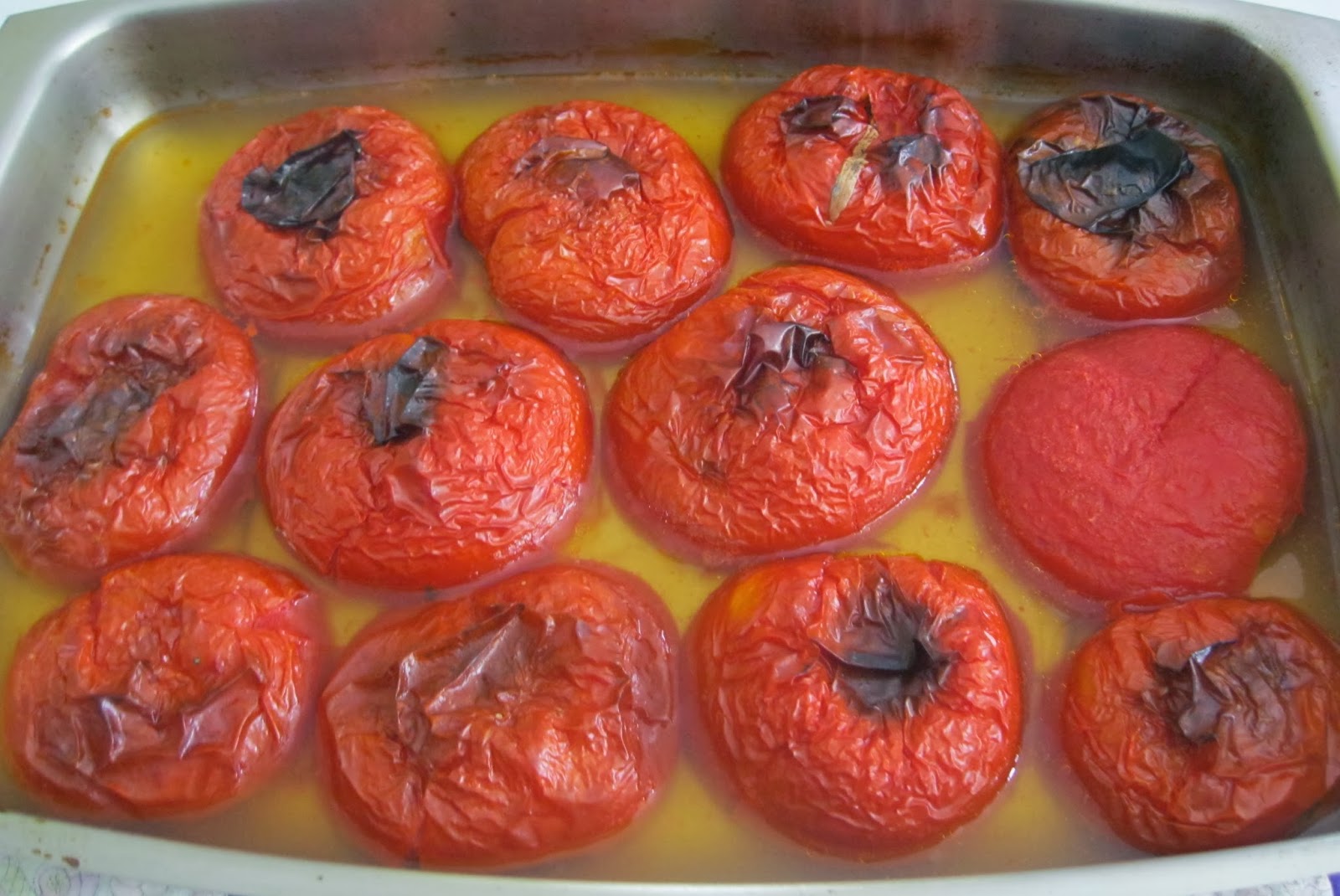 Then pulling the skins off and making soup. 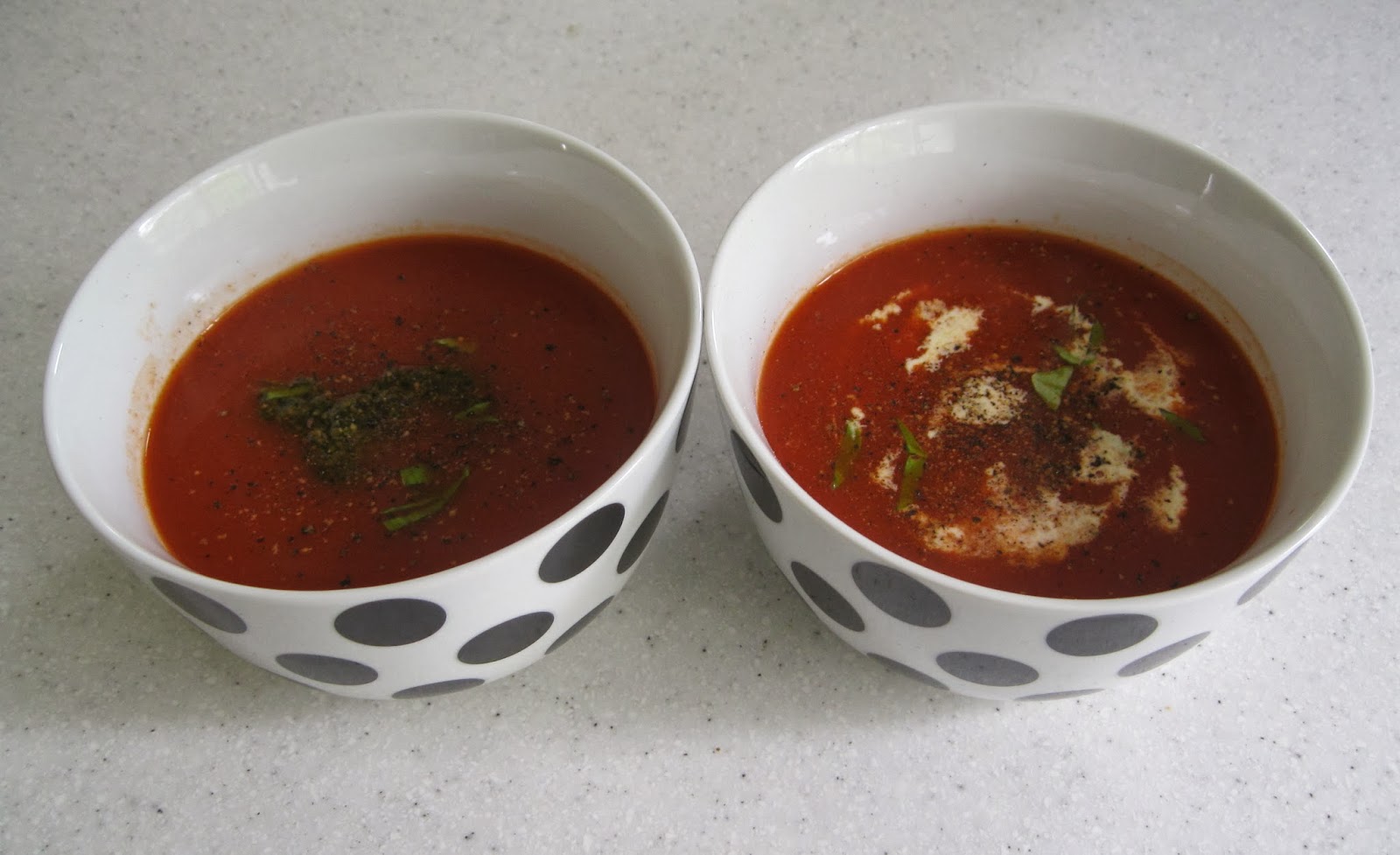 We needed some rain so I wasn't too upset when I got rained off after just one hour kiwifruit thinning. I allowed myself time to do some preparation for my next appliqué flower block. Firstly I cut the remaining flowers out that I have yet to make and ironed them flat. 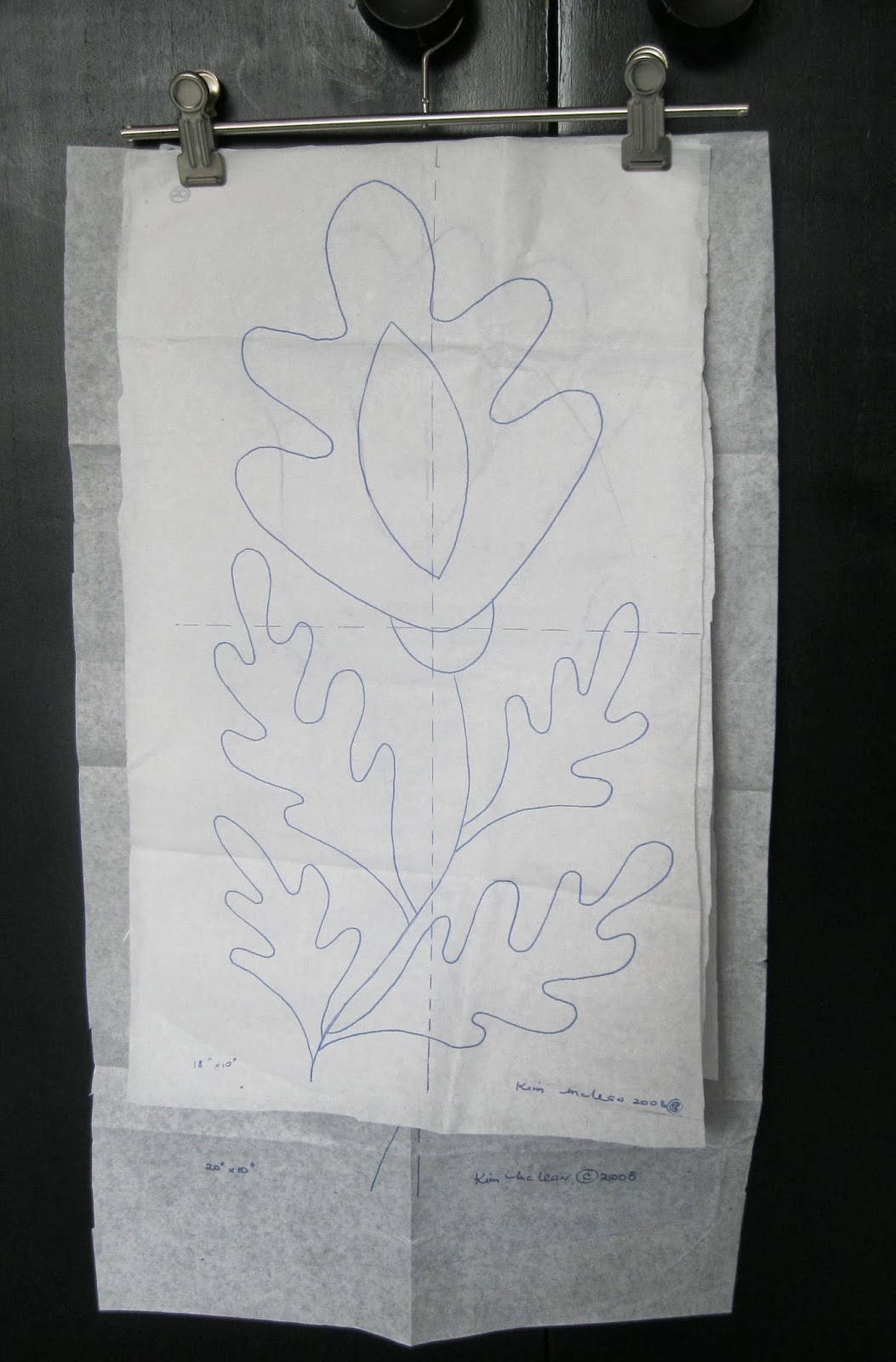 So they keep reasonably flat I hang them on skirt/ trouser hangers. Inside my sewing cupboard I have some hooks which are useful for this as it hides them away, keeps them clean and unfaded. 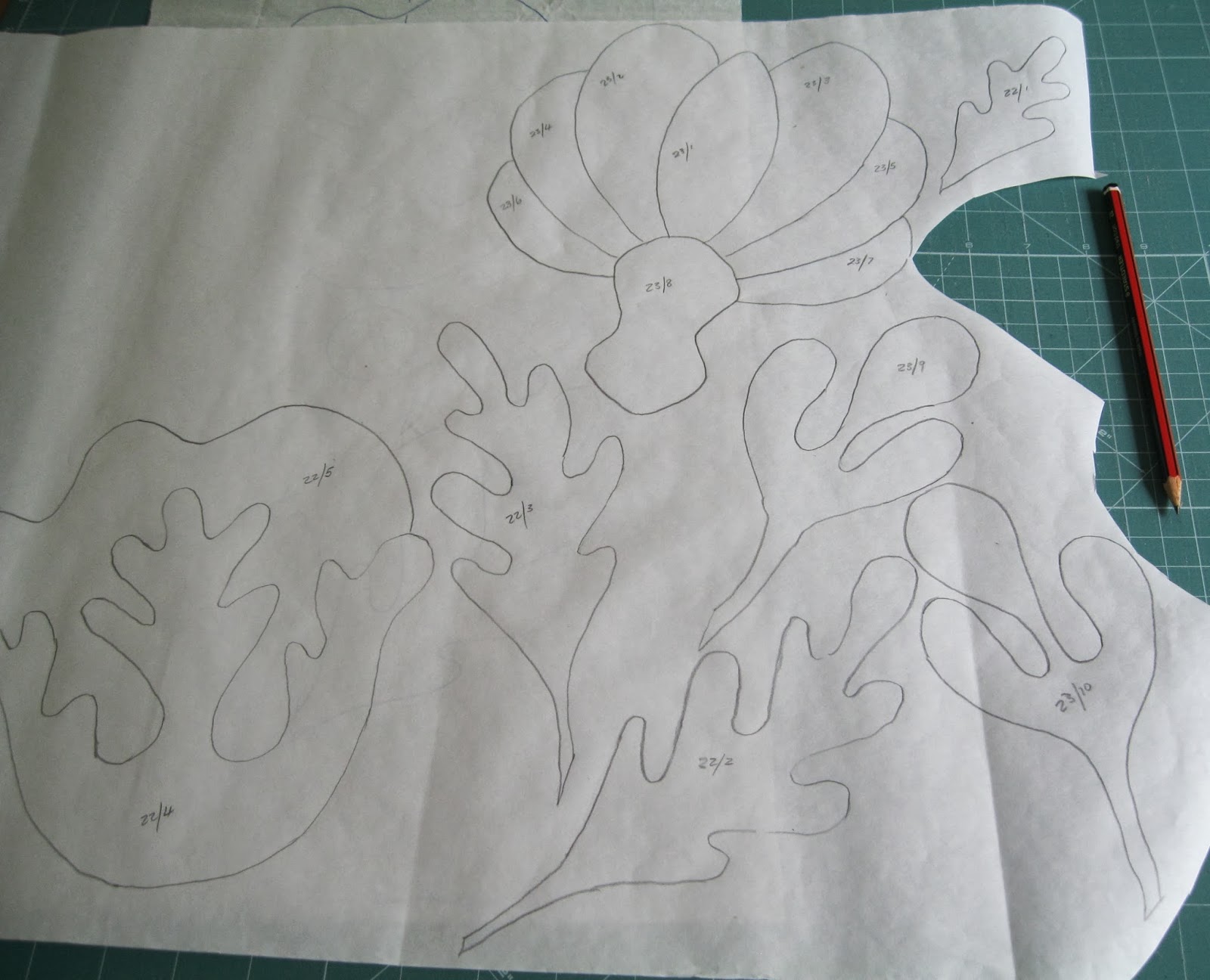 The flower parts are traced onto freezer paperand then cut out and ironed onto fabrics that I decide to use. 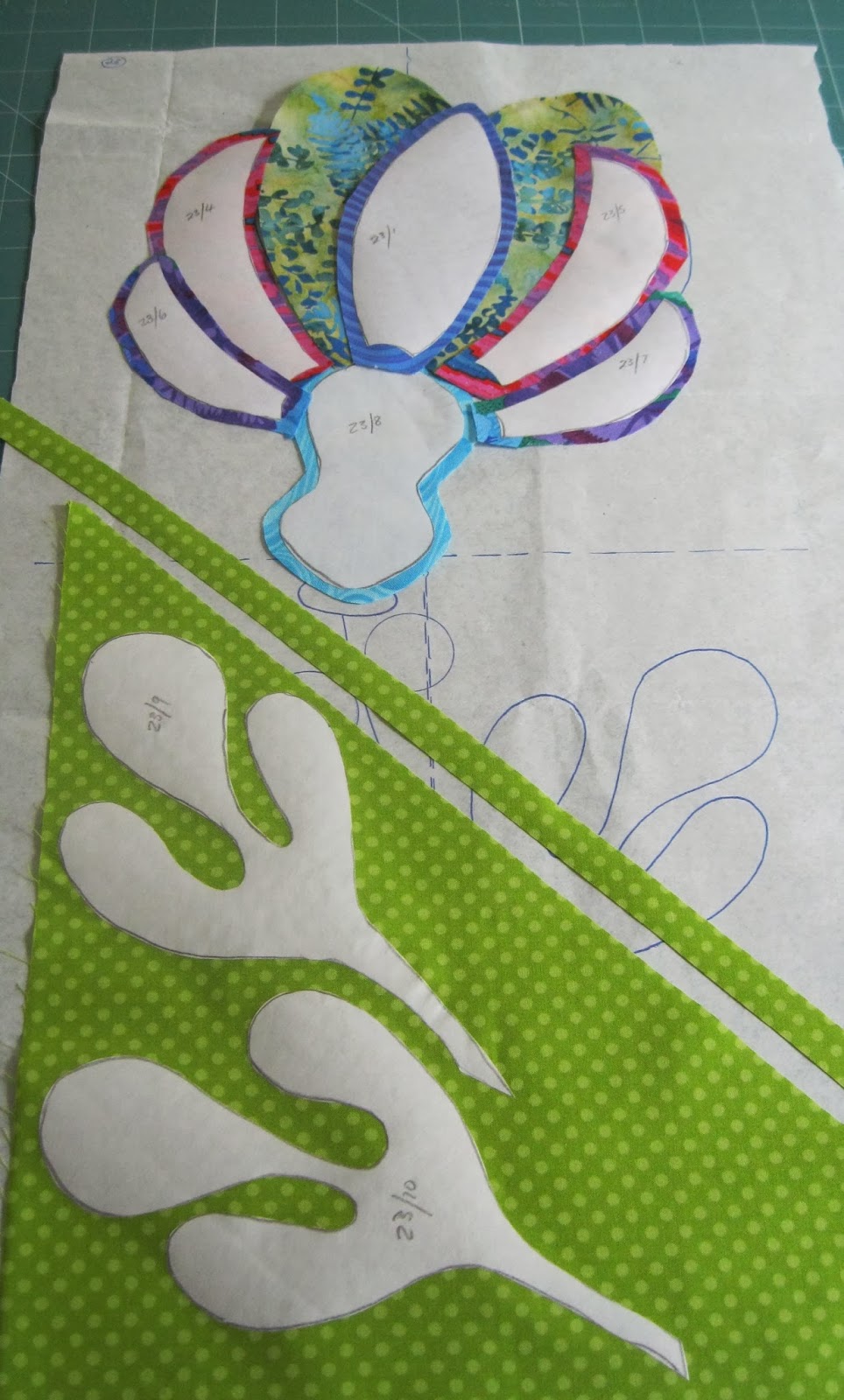 Placing them on top of the pattern where they are going to be sewn helps me to see if the fabrics work well together and have enough contrast.
The completed blocks are also hung on another hanger in the cupboard. 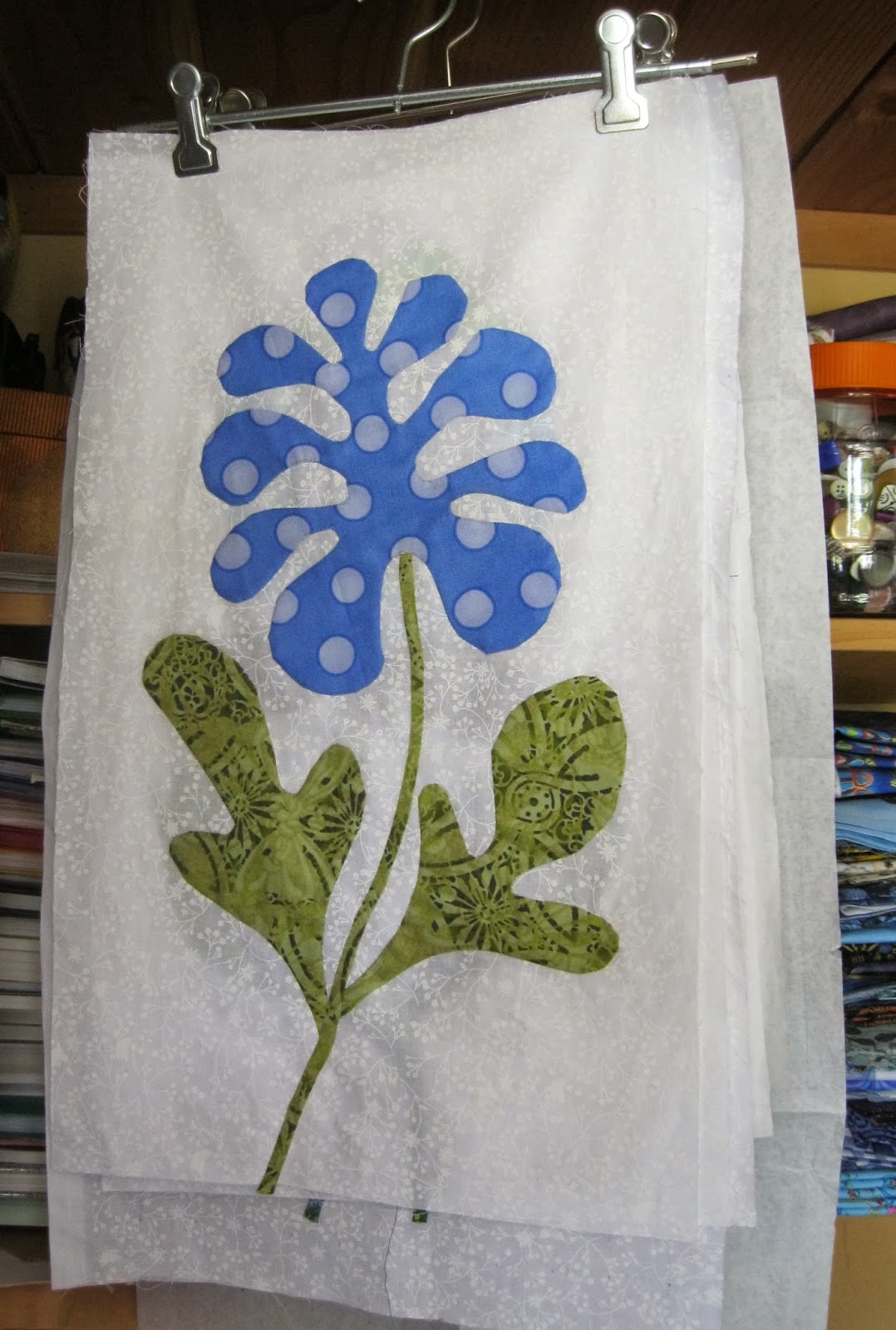 *************************
New Zealand readers.....Is it time to start boycotting Countdown supermarkets? As an exporter I find it very worrying that some Australian supermarkets are taking our products off their shelves and not renewing agreements/ contracts  to stock NZ made or grown. So what does this mean for us? Our kiwifruit and avocados are exported to Australia. ( Are they now going to go just to Asia? )
I did notice the last time I was in Countdown the amount of shelf space they had given to oils from Australia. Countdown  also stock far more fruit and veges imported from USA. I will do more research, but am prepared to take my custom 5 kms further down the road to New World that does have nicer meat and loads of NZ fruit and vegetables and some other products I buy that the opposition does not stock. ( if enough of us took this action it might make a small difference.)
Posted by Ali Honey at 5:02 PM 2 comments: Every 2 or 3 days R is picking this many yummy tomatoes.They then have to be either frozen whole ; skinned  and frozen ; cooked as pulp; made into pasta sauce ; tomato paste or sauce. Some are eaten raw of course. We are not sure why the crop is SO amazing this year? Is it the enclosed white shade cloth fence around the new vege patch creating more light as well as protection ? Or the bumble bees? Or  better care? ( what ever the answer this has to be the best crop we have ever had.)
This morning these were also picked from the same area. 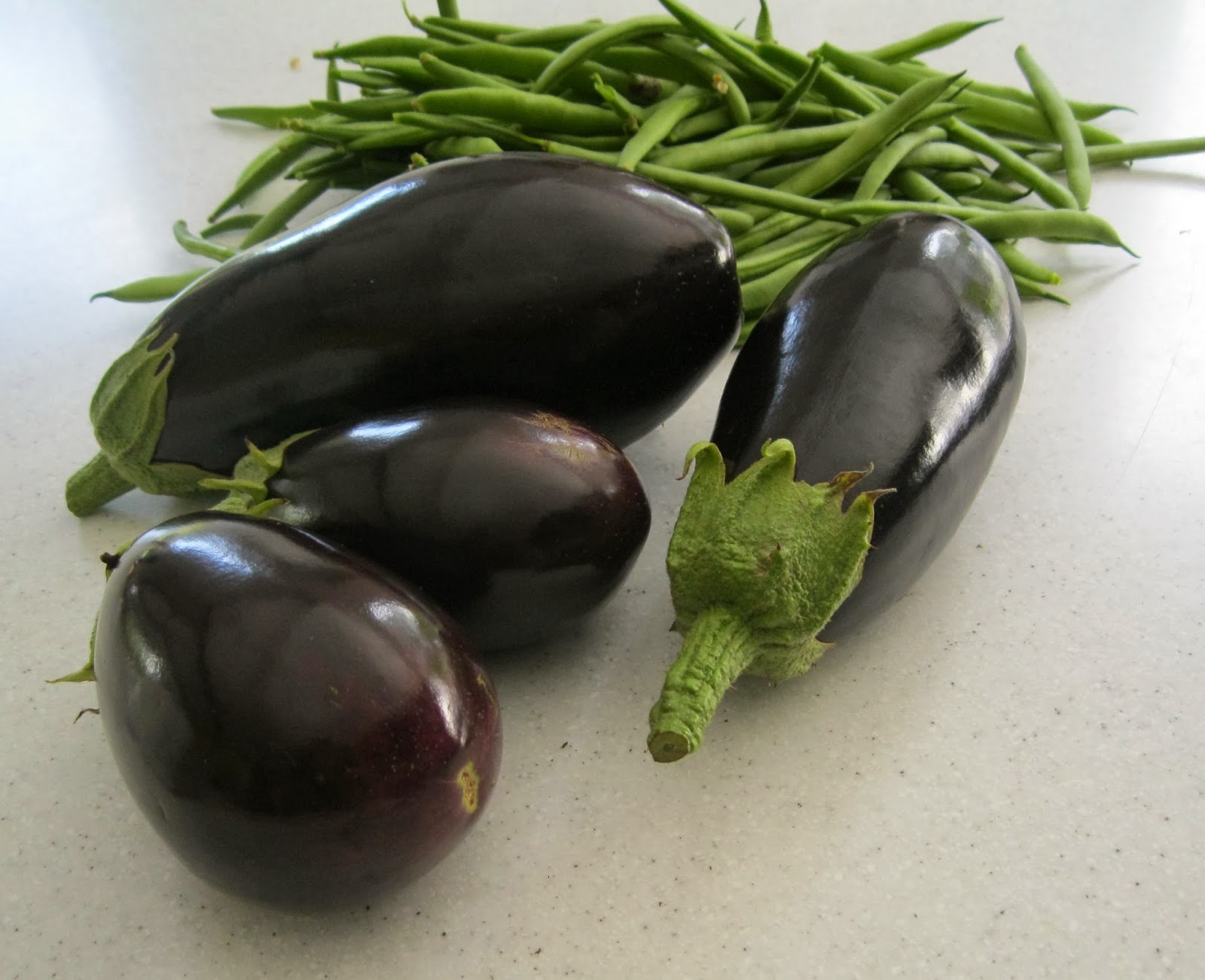 Aubergine ( egg plant ) is a favourite with R, for me an acquired taste. Somehow they always look better than they taste. For me best cut  into  thin slices and fried both sides. Good also for vegetarian lasagna. 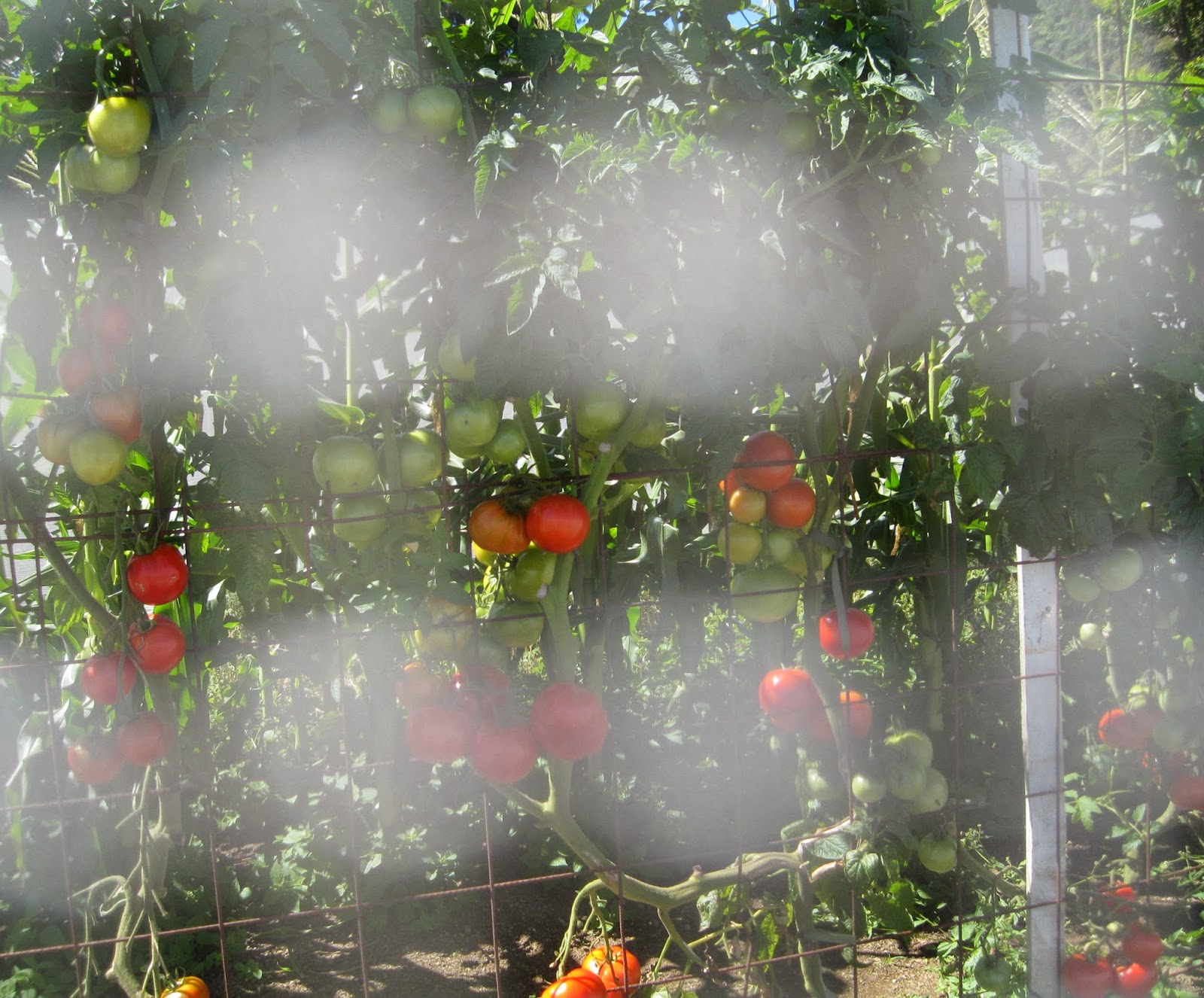 This  photo taken through the mesh fence of the tomatoes.( that's what the white spots are )
Does anyone have any really tasty tomato recipes?

My sister R and her partner came up to stay with R's 2 lovely Grand daughters aged 9 and 11.5. The BOP weather really turned it on, so walking around the Mt., searching in rock pools and playing Kubb on the lawn all proved suitable activities. 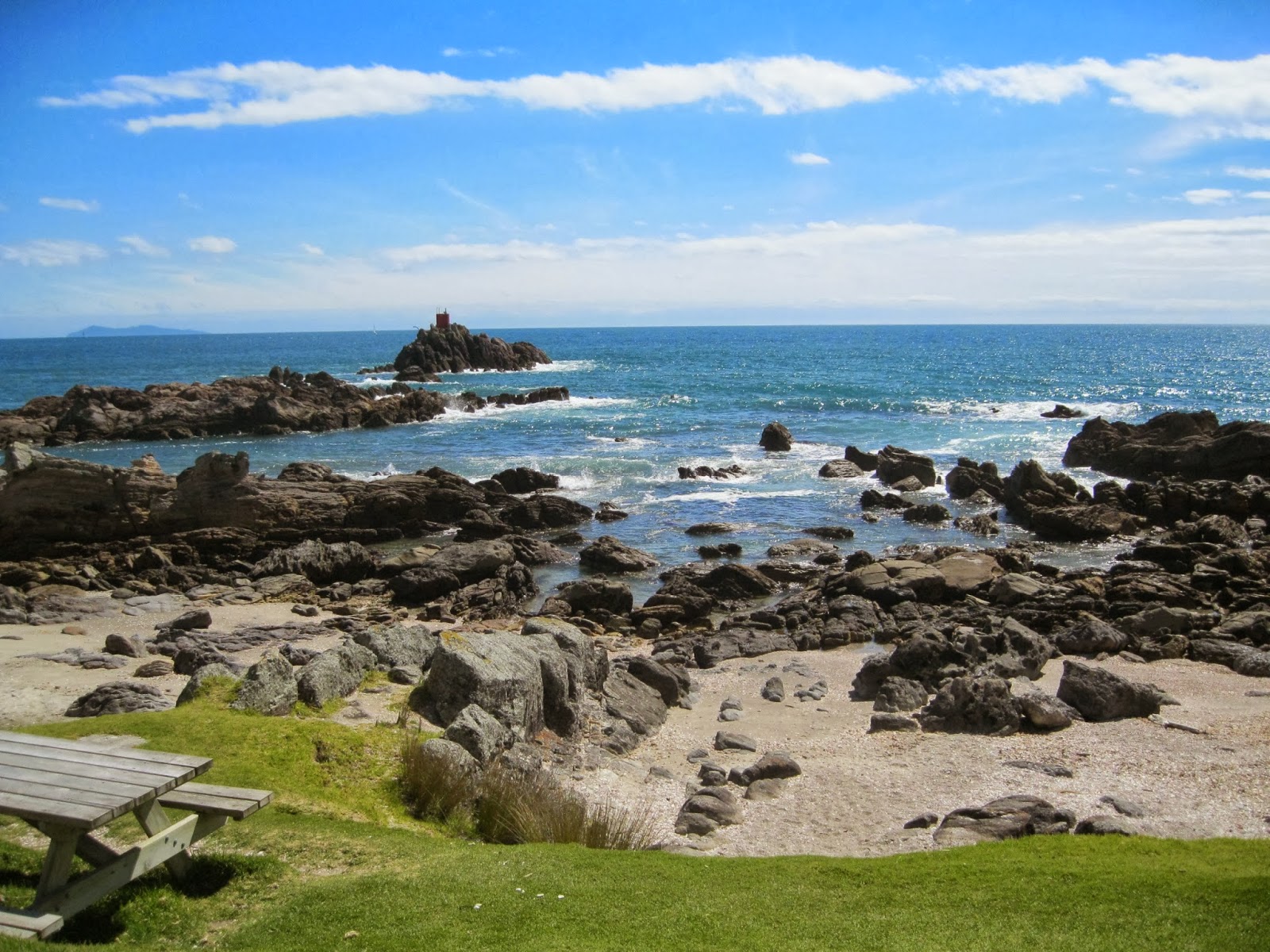 We found exciting creatures in the rock pools at the end of the beach. 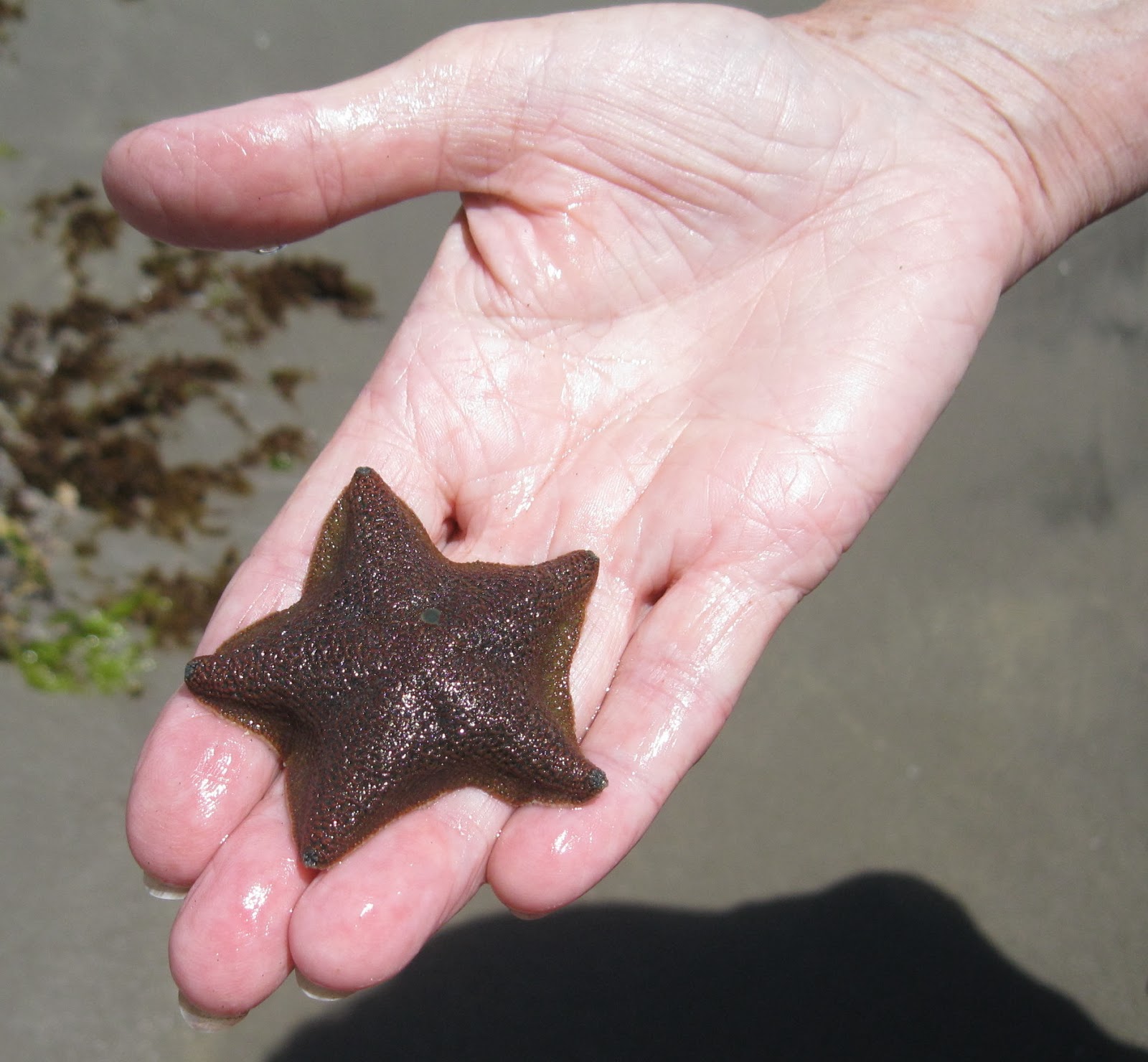 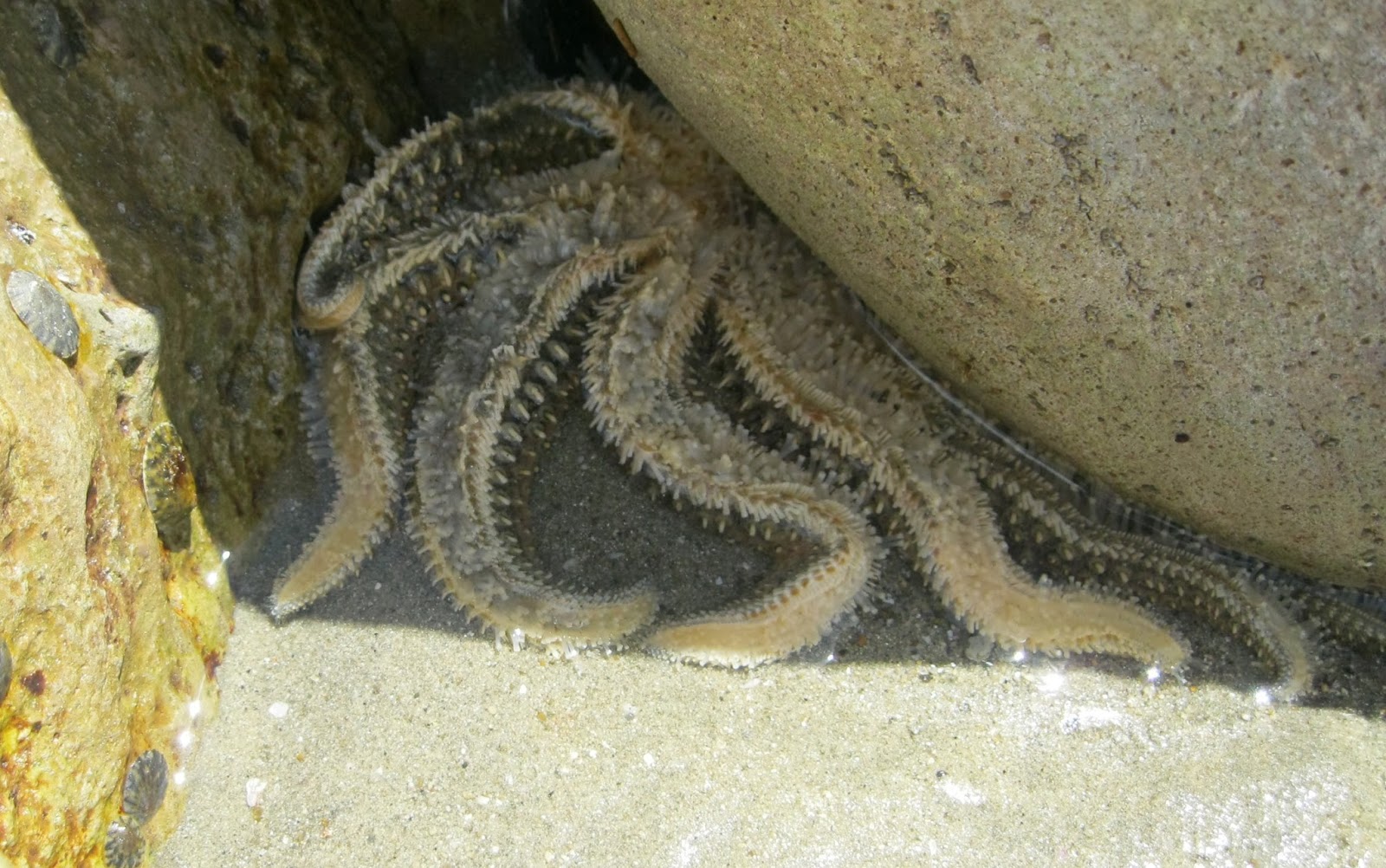 Oyster catchers ( Torea ) on the rocks. 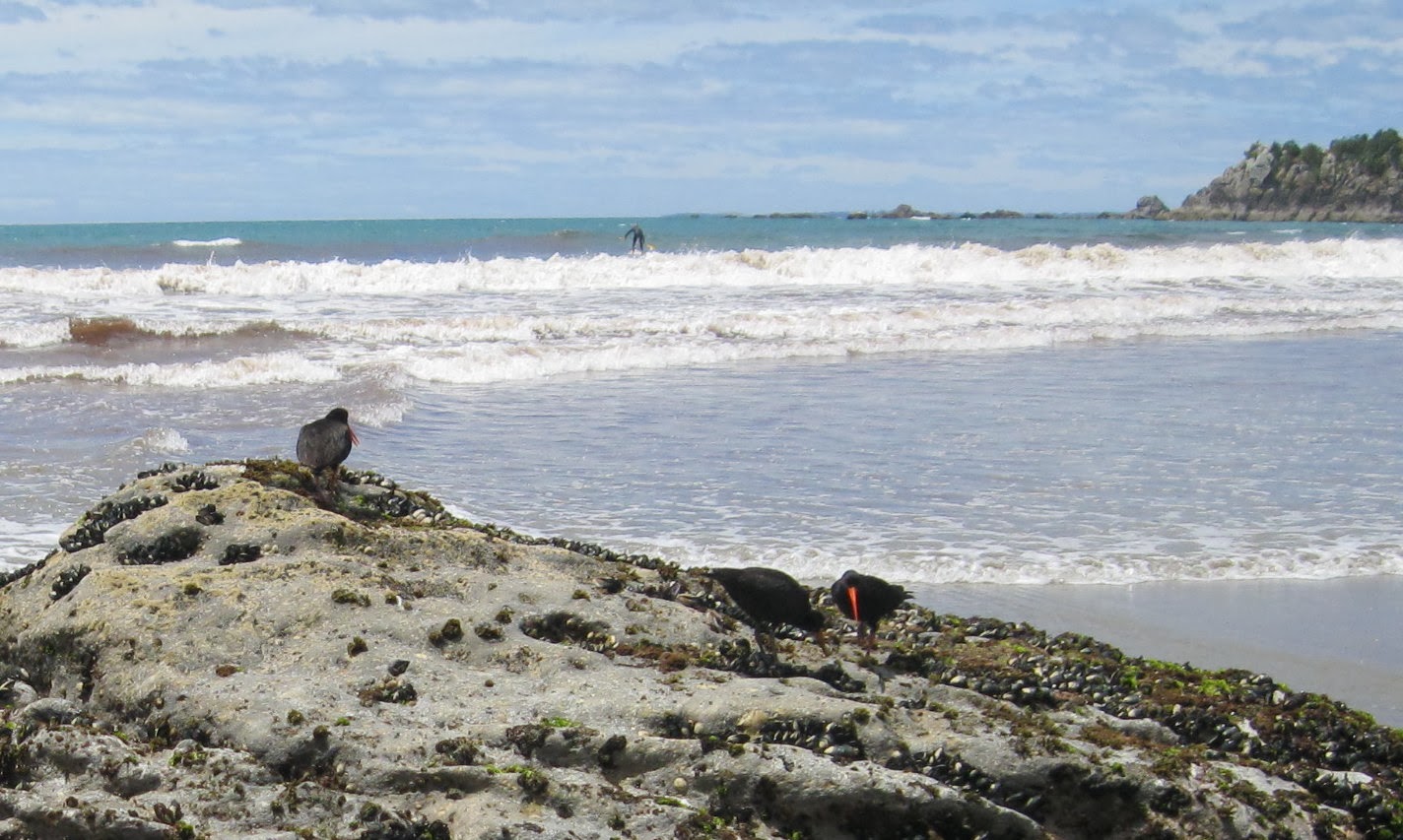 There were lots of mussels for them to eat. 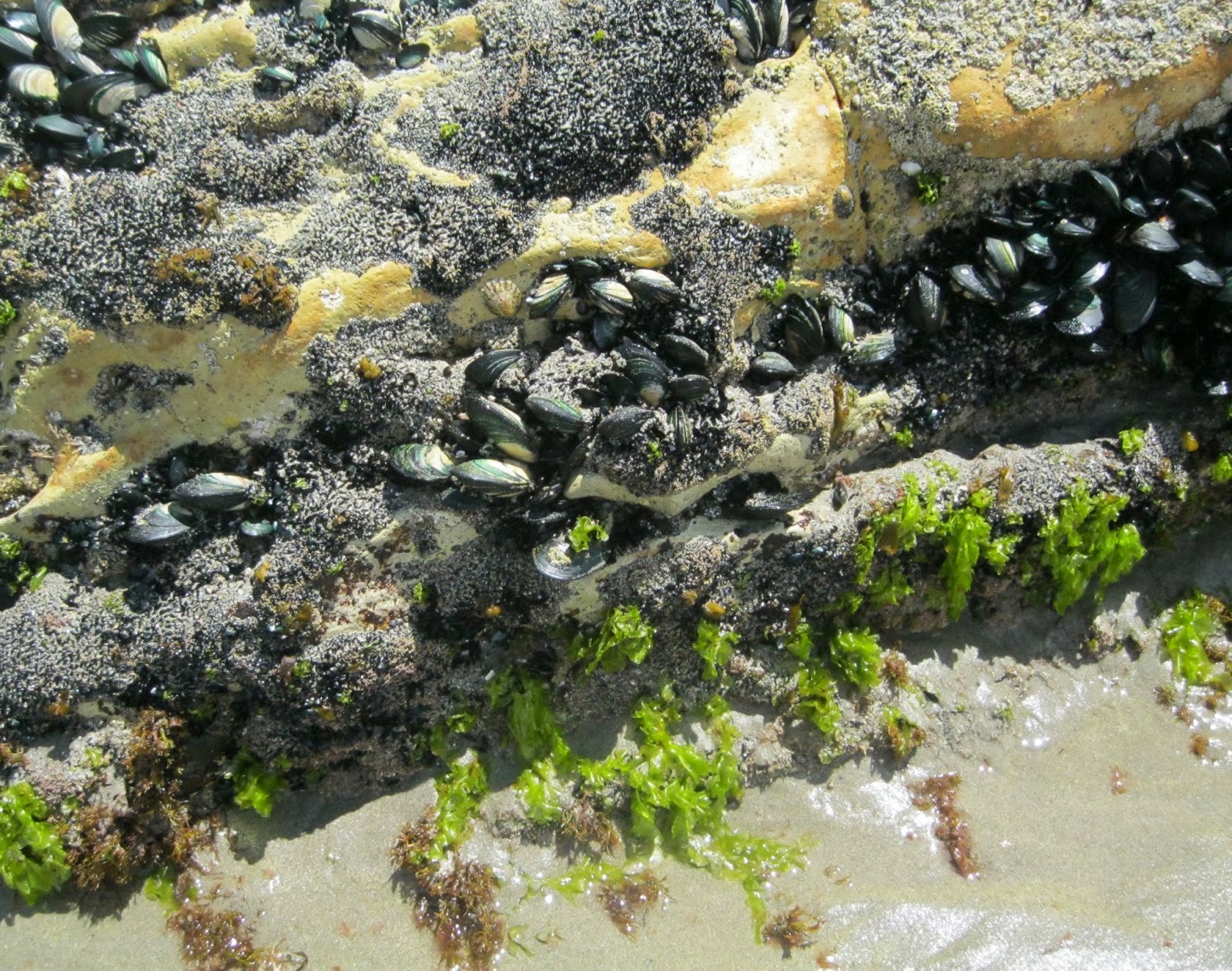 D said he would take us all for a meal. Where to go? ( the 9 year old offered that she liked Butter chicken when we suggested an Indian Restaurant. ) D had never been to one - but the girls had and we had several times. ( D reckoned  it upset his stomach the next day !  He is a very traditional eater. ) Here is the starter platter some shared. 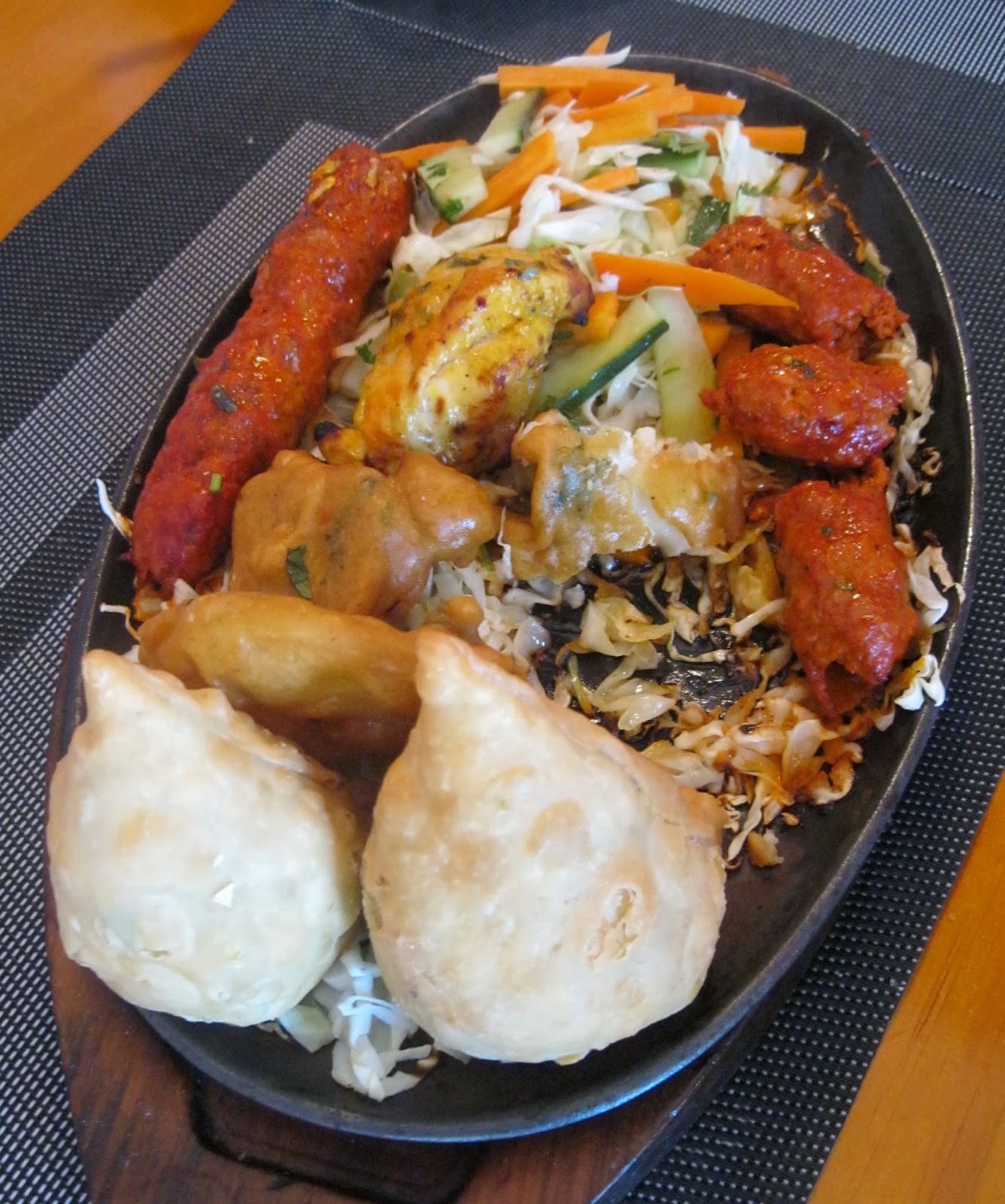 I knew from experience not to have a starter but instead had this platter for my main. 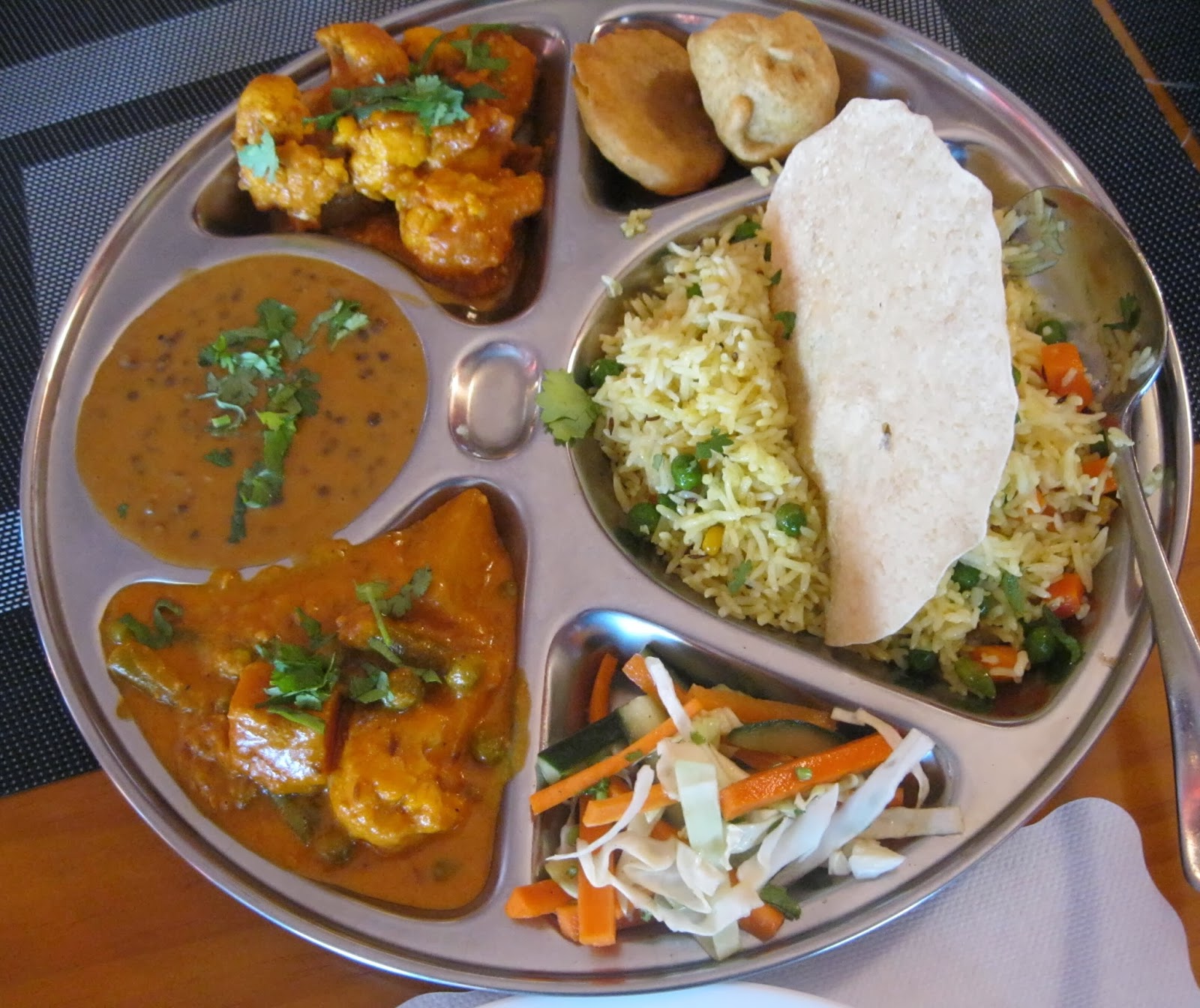 It was very tasty and I almost ate it all, not quite.
All the photos of playing Kubb have family in them so perhaps I will write a seperate post about playing Kubb as I have mentioned it here before.( R made all the pieces )  For young and old it is proving to be fun, gentle exercise and great leveller.
Today is catch up day - I am glad of my washing machine and another brilliant fine day.