Shaken awake at 4.35 this morning. An earthquake off the East Coast  of NZ was felt by us for about a minute. Not too scary. The pheasants were all calling out as they always do...they feel more than we do. They felt the after shocks too.

I have been finishing some of my Projects. Felt Embroidered Ball # 26 which is for Grandson is now ready. ( with a month to spare till he is one. ) 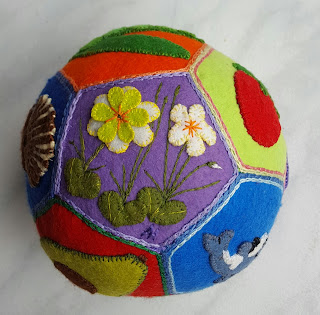 Some of the photos of the various motifs were taken before they were all finished.( hence the unfilled pentagons ) 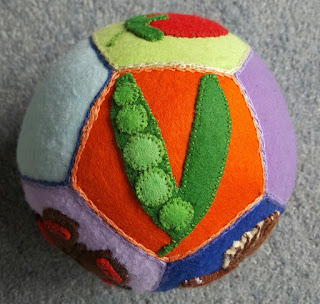 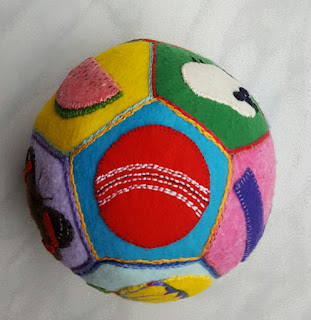 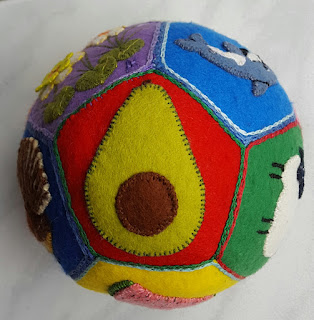 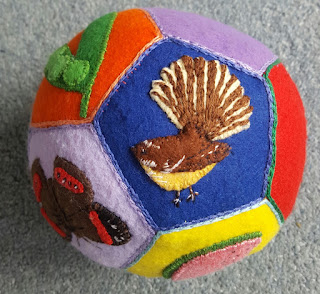 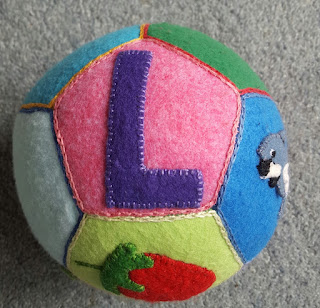 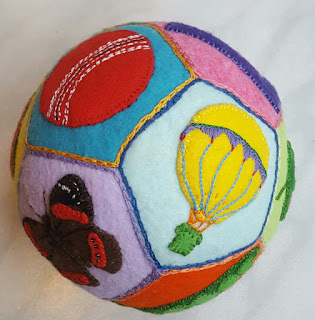 The most difficult part is deciding what motifs to put on a ball. I try to match them to the child it is for and include the Capital letter of their first name.
Each ball is made up from 12 pentagons so 12 motifs. Each ball takes a minimum of 50 hours to make.
I have some reference records  - a photo file of the motifs used and a notebook with details of each ball I have made- what was on it and who it was for and the date.
I have been making them for 16 + years. Some have gone to other parts of the World.

*****
I also finished knitting another vest for Grandson. In brown and brick and grey marled wool. I forgot to take a photo so will request one of him wearing it. 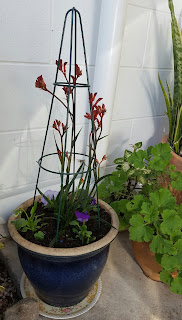 I have been doing quite a bit in the garden too. I replanted this pot with a red anigozanthos ( kangaroo paw ) and some purple pansies. There is an ugly down pipe near the back door that I try to cover up a bit with pots and planters.
In the herb garden I have planted peas - the sort you eat the whole thing - they are just popping up now and lettuces both seedlings and seeds. The zucchini seed hasn't come up. It was last year's seed. I have some fresh ones if the first ones fail. When I was weeding I noticed I am getting free parsley and coriander seedlings coming up.
****
The pollen allergy has settled down so I am able to work on the kiwifruit vines on fine afternoons again. Having to watch for sunburn on my face and forearms these last few beautiful days. Back to drizzle today however so my new plantings will like that.
Posted by Ali Honey at 11:19 AM


We were under a tornado watch today! Fortunately it didn't happen. That ball is a work of art. You do exquisite work and I'm sure your little grandson will love it!

Being woken by the earthquake would have been very unsettling - glad you didn't find it too scary. Hope there aren't too many aftershocks. Love the ball you have made your grandson, such a work of art!

Your pentagon ball is gorgeous! Well worth the hours it takes.