This week things are quiet again at our place. The Grandsons and their parents had to return to the big smoke ( for work ) at the weekend. After days of much washing, ironing ,and cleaning today I have done jobs off my, " To do, " list like weeding under the hedge at the top of a retaining wall while clinging by my toes above a 4 foot drop; removing the decorations from the Christmas tree then taking  it down.  Weeding and watering and planting some new purchases.
Most of the plants were for the front entrance at the end of a quite long driveway. 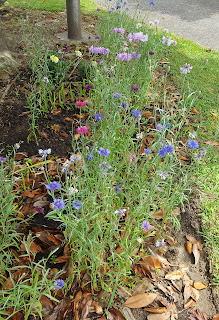 These few cornflowers I planted from seed direct some months ago. On each side of the drive where it turn out to the road is a quite large magnolia tree. That makes under planting quite tricky because of the many surface roots. 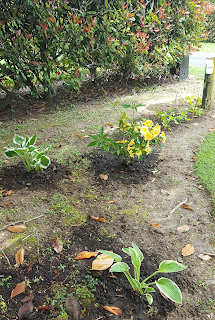 I put in 2 Hostas and a Vireya Rhododendron called Just Peachy. Behind them is a patch of seedling Asters I grew from seed myself in a tray. ( just by the sensor for the lights )
On the opposite side of the drive the garden is a bit smaller ( as yet ) but there I put 2 red Vireyas and a hosta. It will sort of match but not precisely. The magnolias constantly drop leaves on everything below.
******

Things I planted earlier, in the small side garden where I dug out the box hedge, are now rewarding with colour and pickable roses. 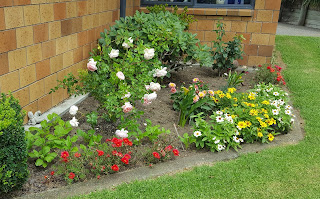 I have also weeded  under the 2 cherries I have circular garden around.
***** 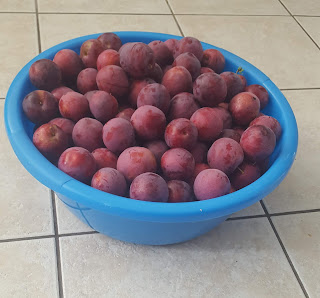 The Billington Early plum tree s laden...plums being given away. Loads still to pick.
Maybe I better make some plum sauce. ( they are red fleshed and sweet )

Both sorts of beans ( my scarlet runners and R's small green ones ) are producing profusely.
The tomatoes now cropping well and the sweet corn about a week away from ready.

Finally to prove I did finish smaller Grandson's felt embroidered Ball for him. 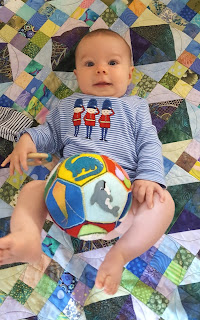 
My a happy looking fellow! I'd be smiling too if you made me such a beautiful present...
Your gardening leaves me speechless especially since I'm nursing a really swollen wrist from an excess of hedge clipping yesterday!

Sadly our garden is not in such good shape as yours. I blame it on that cold wet start we had. The greenhouse is producing tomatoes now though.

Oh, lovely ball and I also love the beautiful quilt that your delicious grandson's lying on!