Life seems to be one worrying event after another at the moment in NZ. As kiwifruit growers we have had the most rapidly changing set of events in the 30 plus years we have been orcharding.Psa the bacterial vine disease is spreading / presenting itself in many orchards now. One orchard with vines with the disease is only a couple of kilometres away from us across the main highway .  At last count 51 orchards now have some vines with the disease. ( more gold vines have it than green at this stage...but they flower earlier than green. ) It has reached most growing areas in NZ.( more information about this can be gained by googling the subject... (as it is a rapidly changing story ). All we can do is keep checking our vines for any symptoms. We are due to get our beehives in for pollination tomorrow night. No artifical pollination will be happening this year...as pollen is a likely way of spreading the bacteria.
Luckily there will be no change to market access of NZ kiwifruit to other countries as it is not spread by the fruit - BUT the vines die or have to be cut out so there will be LESS fruit.

Worse still is the Pike River Mine explosion that happened on the West Coast of the South Island. 29 miners are still trapped/ missing underground since about 4pm Friday. TV 1 is running hourly updates on what progress is being made trying to make the rescue attempt.

Over night we have had light misty rain ( which is much needed ) but will stop the bees working in the vines.( they don't have rain coats or umbrellas ). I went outside with my camera and these were the 2 things I wanted to capture in image . 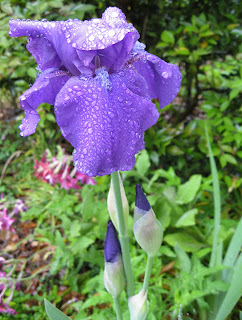 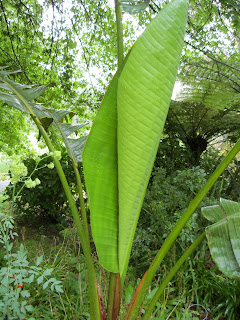 A new pristine leaf unfurling on the Strelitzia plant. The contrast with the wind tattered older leaves is marked.
Posted by Ali Honey at 11:34 AM

Ali it most definately will be a worrying time for you - we were amazed when we found out that it had even crossed Cook Straight. hopefully there will be some sort of remedy soon before you and any others get hit.
Yep, things are a worry down here. Our miners are still in the mine and there is yet to be any contact made - fingers crossed and prayers for all.
hugs
Miche'le

What gorgeous healthy looking plants in your garden...I am definitely praying for no disease in your orchards! so worrying!!

(You would indeed have liked my Granny. She was a pet.)

Beautiful iris - and I hope the virus keeps away.

Saddened to hear of the concerns with the miners and the plant diseas spreading. You guys will be in our prayers.

Such grim news about the Mine disaster. Keeping positive thoughts for everyone concerned.
I do hope the Kiwifruit crisis proves not to be as bad as feared.
Love that brilliant Iris.

I hope you only hear good news from now on.

Good luck with the kiwis. It must be so frustrating to know there is a virus but be able to do nothing but wait and see...

I'm so sorry to hear about your woes with the kiwi disease--here's hoping that it will resolve itself soon.

Not a lot of good news around at the moment, is there? Fingers crossed that your vines wil be ok.