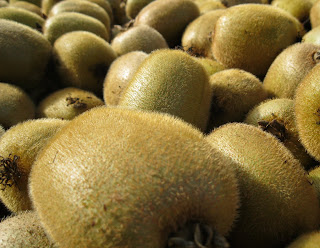 It is back to raining today so we realise just how lucky we are to have completed our Kiwifruit harvest for 2011, yesterday in the FINE.
Before we started, we got a further 90 fruit sample taken to test to see if the dry matter had risen - indeed it had so we are in "Y" the top taste band, so get paid more than lower taste bands. ( Many orchards have not achieved that this year )
As this harvest time is a big deal for us and I get to blog about it every year I will try to explain some of the things that were a bit different this year.This was our 29th export crop of Kiwifruit. Back in 1983 our first little pick off new vines was just 329 trays, so things have changed a great deal in those intervening years. 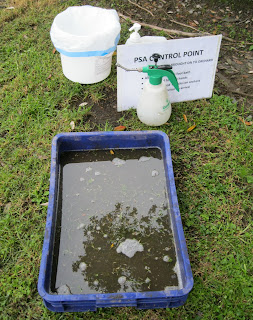 Late last year a kiwfruit virus  - PSa ( pseudomomas syringae pv actinidiae ) was found in vines on orchards in Te Puke area. That changed things for ever for all orchardists and the kiwifruit industry. To try and avoid the disease spreading between orchards there are now in place prodedures that it is hoped may help. This was the first harvest where all pickers, their picking bags and footwear had to be disinfected.The blue foot tray was for shoes, the sprayer for picking bags, the sanitizer for hands. The bin was for gloves to be discarded after one use ( or one orchard ).
The tractors and bin trailer also had to be washed down / disinfected before leaving our orchard for the next one. ( that part of it all went well and no one grumbled as it just the norm now ). 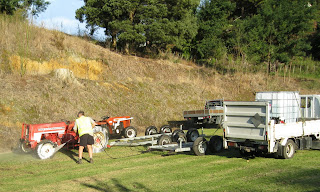 I may not have ever shown the bin trailers ( empty )  that are towed behind the tractors . 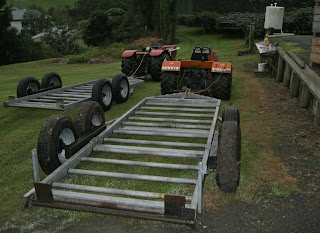 They are  rows of rollers so the bins can be pushed on and off and have flaps to hold the bins in. A rope to the driver's seat releases this flap, the trailer is tilted and the full bins silde off the back.. 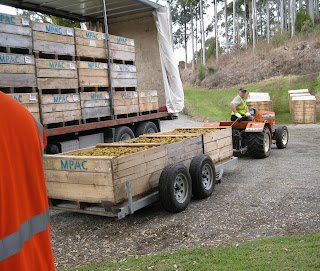 We had 4 tractors with bin trailers. One broke down so my trusty old Fergie was rushed from the shed and performed happily with on worries.( it knows it's way around our orchard - hehe ) Only one  tractor got stuck in Block 1 and with much hilarity got pushed out by the pickers.( it had stink tyres. That wasn't bad going as the ground everywhere was still very soggy and a bit muddy by the contanst use at picking time ) 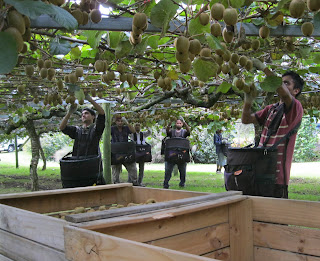 The pickers all worked so hard we were impressed. They carry a huge load of fruit  in their picking bags. ( the bottom of the bag has a flap that is dropped down so the fruit roll out the bottom into the bin.) 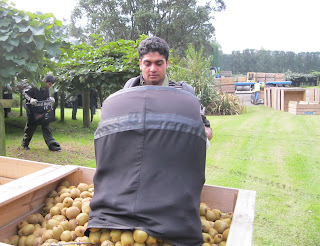 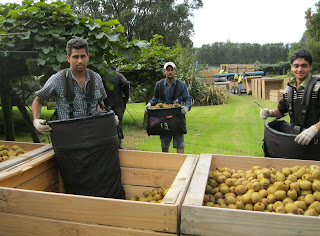 This is a general scene near the end where you can see our friend Brian C who did an amzingly good job on the forklift. 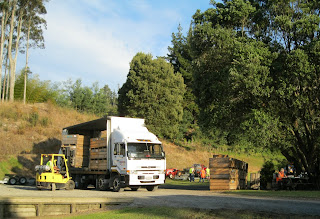 On the front right of the photo you can see a table where the boss of the picking gang  is sitting writing his records for the day. That is my outdoor office where I fill in the bin cards and keep the tallies. The other good news is we picked more bins of fruit than the count samples taken earlier suggested we would get and consequently ran out of bin cards. We now hope to get a good packout result ( export trays ) from the packhouse in a couple of days. Our fruit is getting packed  ( not stored or CA stored like last year ) as the packhouses have had no work due to wet weather.
( All photos should enlarge with clicking ).
Posted by Ali Honey at 3:57 PM

Ali, that is really interesting.....we buy and eat kiwifruit without knowing all the background story!

I love to see your Kiwis!! The fruit is so pretty...I am glad the disinfection precautions are in effect too.