The Good The Bad and the Ugly.

I understand that not too many of you want to become orchardists then! I'm not surprised!
Lots to report on. 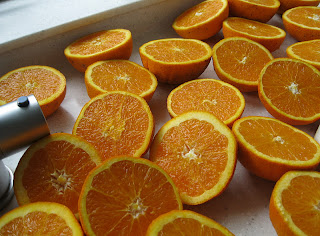 Today is a  brilliant sunny, calm, day, but yesterday and the previous days the wind has done so much damage. The oranges were ready so lots falling on the ground doesn't matter. I have given lots away. I have been juicing them. The are very sweet with no seeds ( Franklyn Naval. ) The old faithful Kenwood has a juicer attachment. ( I have frozen quite a lot of it ). 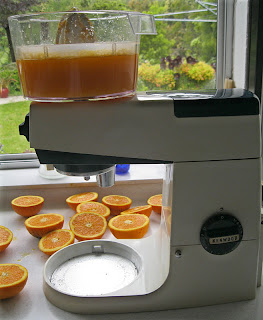 In the kiwifruit the bees have been battling on against the wind. There are fruit already set. We have had one lot of artificial pollen applied. More tomorrow. The vines have sustained many many broken fruit growths. luckily we had lots but it will have reduced our potential crop.
More sadly the wind broke out a large fruiting branch ( the only one with fruit set ) (and about a third of the total tree ) of my little new apple . So annoying when the fruit had set. It broke at a cicada damage on the branch. 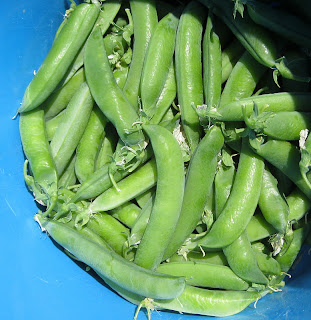 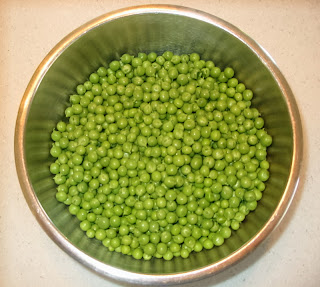 This lot got frozen. We have eaten some, freshly picked -  they are hard to surpass.

Here's how the garden is looking this morning; a bit wind blown but okay....but is it? One potato plant was displaying alarming wilting symptoms. So it has been removed. I then set about trying to find out what was wrong. We are really worried it might be psyllids.( potato and tomato psyllids ) I started inspecting each tomato ( in the middle here ) plant with my 10x lens. I found and digitally killed several different creatures and some nymphs. Are they phsyllids ?. Not totally sure yet. Google images is helping with my research.we will be so sad if our criops get destroyed at this stage. The potatoes are ticklable....I took 4 little spuddies for our dinner last night - yum. New potatoes with new peas are such a delight. ( along with tomato, pumpkin and salmon fritters it was a tasty feed. ) I will keep you posted about my research. Other neighbours have lost crops last year with psyllids - that's  why we were worried. ( yet another pest NZ didn't use to have ) 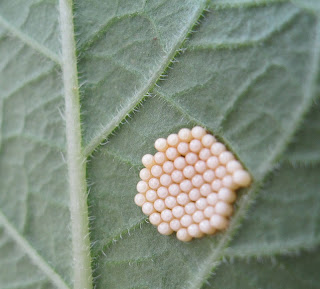 This is one of 2 rafts of eggs I found during my search - they are NOT psyllid eggs, but the precision with which these eggs are laid is amazing so I kept them to watch.They are like little pearls.( good or bad -I wonder? )
*****************************************
Yesterday New Zealand had a General Election. The National party   was returned to office, but they will need some coalition partners to have a majority in the house. The Green party did very well ( their best effort yet ) and will have list members in the Parliament. That is good, they have some good ideas BUT worrying for us too as  they seem to think any sort of farming is bad and don't understand that the country needs food and more importantly exports. Every thinking person wants to look after the environment so they don't have that on their own.  United Future and the Mana party and John Banks for Act each  got one seat. ( Act  didn't get enough party votes for Don Brash to get in thank goodness! )
Not so good perhaps, is the NZ party including leader Winston Peters also got list members in. I don't mind their policies but can't abide Winston's behaviour. It is all about HIM. He cannot say the simple words yes or no but always follows a question with a question.It will waste so much time in the house.
Also yesterday as part of the election there was a referendum about our voting system. 55.7% of the voters said keep MMP - our current system.
So generally speaking the results sit comfortably with me. National and their coalition partners will have a tough 3 years - whoever got in would have had, with the world economy being in such disarray.
Posted by Ali Honey at 12:39 PM

Hope you don't get any more wind damage - nature can be cruel sometimes. We've had so much rain this week that our local river is on flood watch!

Such a shame about your wind damage.

Hope you get to the bottom of what is attacking the spuds.

I'm for food labeling & knowing where our food is coming from - I object to the possibility of eating a broccoli from China. I'd like to think the kiwi fruit & avocados I buy in supermarkets are from you - smile

I hope there are some peas and spuds ready in about 3 weeks :) shame about the wind damage. Can't wait to see you mum

Oh, I know at least one person who would LOVE to be an orchardist! If you ever need an intern/apprentice give me a shout! I will have to show him your latest post when he comes home on the w.e! He will be very interested in how you help the bees!