I am so glad to know that my blogging friends in Australia are all safe. What a massive clean up they all have ahead of them. Tracey ( Peppermint Patcher ) reported how scary it all was.( The weather certainly is taking it out on them. More flooding is likely I would think after all that rain inland)
********************************* 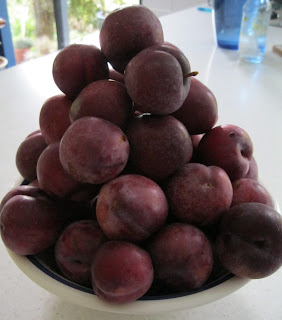 Not many of our neighbours grow fruit and veges, but one has a lovely plum tree that is this year loaded with bright red plums. Aren't we lucky to be given a big bag full. In a couple of days these will be delicious. ( Our wee tree is too small to produce yet ).
*****************************************
Yesterday was also the 80th anniversary of the Napier ( Hawkes Bay really ) Earthquake. NZ greatest loss of life in any disaster.  ( 258 died )  Our parents all told us about this because they were all High School age at the time.( and all felt it although many miles away ) The brick building that was demolished when I was a Primary School had cracks in it caused by that earth quake.
My Mother's cousin, Lauris Edmond ( a New Zealand Author ) begins her autobiograhical story, "Hot October," by describing in the first chapter her experience of that earthquake. Her younger sister Lindsay was having her first day at school. Lauris aged 7 waited at her classroom door then  took her outside to play when the quake began. Their school blew itself apart and vanished in a cloud of dust, before their eyes, as they lay on the grass and watched. They, like most of the kids ran home ( only 5 minutes away ) but kept stumbling and falling as the quake continued for 3 minutes. They met their Mum and other Mums all running towards the school. ( ther were many aftershocks ) She describes it all very well - it would be a vivd memory wouldn't it?
*************************************
Last evening after a very busy day ( with lots of horrid news on TV ) I had just remarked. "Isn't it strange how some days everything happens, " when our phone went, ( set off by the medical alarm worn by an elderly neighbour. ) We jumped in the car and raced off stopping to collect the neighbour who gave the plums to us.  She is a trained nurse, so might be needed. The old neighbour only just out of hospital on Tuesday had fallen and cut her leg and couldn't get up. The ambulance was called; she was okay but needed more care than we could all give, so as soon as it arrived we came home. We all played our unrehersed parts well . Her son rang this morning to Thank us all. She is being kept in hospital till they decided what help she needs and how to rehabilitate her. She has arthritis in both knees as well which somehow caused the fall.
No wonder it took me ages to get to fitfull sleep last night.
*************************
Anyway back to boring old kiwfruit work now. We are so lucky to have fruit to work with - My heart went out to the poor banana grower  ( we saw on TV ), who lost his entire crop and his home is yesterday's Cyclone.
Posted by Ali Honey at 11:06 AM

I enjoy Lauris' writing.
It is good that you were so handy to help your elderly neighbour. As my knees deteriorate, it is a worry.
Right now, boring & routine sound very good to me!!

I hope you manage some quality sleep this evening. The plums look delicious!

I've just found your blog.
a wonderful view to the other and completely different side of the world !! :))