Today I have 2 topics. I'll start with the pleasant one then if you don't wish to read the second you can miss the tale of wanton destruction which follows. 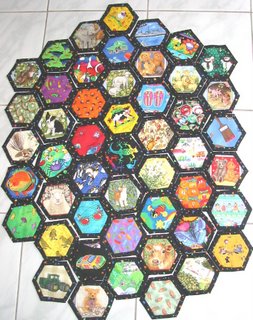 Good progress is being made with my I Spy hexagons. They are fun to make and quick to sew.( 49 finished to date ) The children at school last week proved that the I Spy game part worked very well and that each little hex was tactile and nice to move around and fiddle with.There were more games to play than just I Spy, the most popular one being , "Which one do you like best, ( and want to take home )?"
Monday was a fun day. A friend traveled up from near Taupo where she lives to have a days shopping in Tauranga. She has 2 weddings to go to in Oz over the next few months and needed some lighter clothes. As we hadn't seen each other for a while there was plenty to talk about over coffee and then lunch. She found what she wanted and I discovered some shops in the city I didn't know were there. When she took off for the nearly 2 hour drive home I went back to Barnhouse Quilts (my local) and selected some new fabric that has lots of possibilities for my quilt. The best fabrics are those that I can fussy cut more than one object from ( better value ). (I also need to strive to get a full range of colours and a variety of values, light to dark.) I have been entertaining the idea that the quilt could be put together rainbow fashion. The photo shows a random layout which I know will work equally as well. I will play with them when more are finished and decide then.

If you are squeamish don't read on! 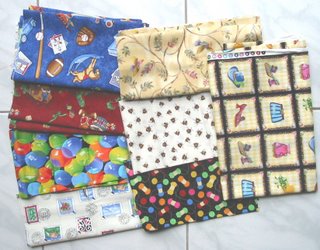 I haven't been telling this story as it happened because the subject matter didn't really fit this blog ; but have decided now it is over ( I hope) to air it briefly. Our neighbourhood has been being terrorised over the last few weeks by 2 dogs. We don't have a dog or any stock but many of our small farm neighbours do. DH is one of the only blokes around with a gun and the licence to use it.......so we had to get involved. At night sheep and lambs have been mauled and some killed by 2 dogs.( Sometimes seen fleetingly in the daylight but mostly attacking at night.) Then more recently just the one dog has been killing. We live with boundaries to the bush and have some bush ( forest ) on our property which gives cover. The ranger and DH had set 2 traps and yesterday afternoon we heard one close and a dog start barking...it was caught. DH ,with gun, quickly put an end to it. A mastiff mongrel cross, weighing only about 18 kilos, had killed all that stock. ( we have photos; for the record and as evidence ; of it; and the sheep, but I am not putting them on the net ! )
It had roved over several kilometers around here and the tally we know of is: 41 sheep and lambs killed or injured; 1 goat killed; 1 pig injured; several chickens eaten; 2 guinea pigs eaten; and 3 people have been frightened and rushed at on their own properties. The remaining sheep are so traumatized they stand staring wide eyed poor things. Some may recover - only time will tell. Last night we got a full night's sleep with no neighbours sounding the alarm or needing help. I do so hope for their sake that this is and end to it and we can all sleep easy and get back to our own work. ( we don't really know what happened to the 2nd dog...Maybe it belonged to someone and just got led astray ) The killer dog had obviously been let go by someone a couple of months ago and was living rough...not really it's fault!!! The dead sheep are worth NZ $95 each. So it is a financial loss too.
Posted by Ali Honey at 9:07 AM

The hexagons are looking great - I can just imagine the kids crowding round and pointing out their favourites. Sorry to hear the story of the marauding dog, the whole area must have felt under threat whilst it was on the loose.

Sorry to hear about the dog problems, but glad you were able to handle it.

I like the way the hexagons are going. Just idle curiosity, which one seems to have the greatest 'kid appeal' when they're sorting? Do you see a difference between the boy and girl favorites? :)

ohh, good questions forestjane. I love the sound of a rainbow arrangement. Do you need any more fabrics? Let me know, it would be fun to send you some squares to put in your quilt.