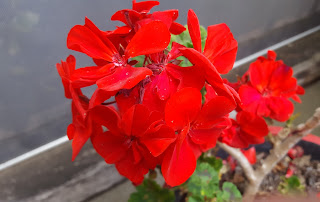 That's a bit bright and in your face isn't it.
It's a close up of one of the geranium flowers in a pot I have outside. I almost lost it with rust during the summer but by taking off all the leaves with spots and burning them I think it is okay going forward.
I have it in a red pot for it's colour.
We don't grow them in NZ as much as they do in places where window boxes and planters on the street abound. I saw lots in UK in 2011. 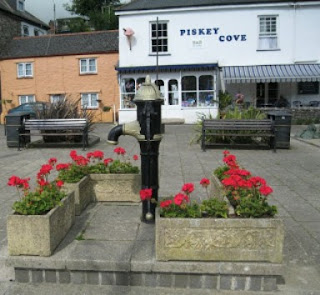 I have already been for my walk today. A bit windy but the sun came out and I saw some neighbours to chat to ( at a distance of course. )
She told this joke. She had been to the doctors( having had major surgery some weeks ago  ) " Gosh it's quiet in here,"  she said to the nurse." Yes its SO quiet," replied the nurse. "Just before an elderly lady was in here having a skin cancer burnt off her nose. She was fine and went off and got into her car. There were just 2 cars in the carpark and she managed to back into the other one!"

I want to do more sewing as I am up to sandwiching my 3 layers and quilting my little project. Its a dust cover for over my Bernina when it's out on the table ( with it's tray attached ) but not being used. I saw one somewhere that had a pocket across the front for bits and pieces  - scissors etc. I might put that on too.
I think it's Saturday ( keep having to check I'm on the right day...one seems very like every other ), so enjoy your stay at home weekend friends.
Posted by Ali Honey at 3:36 PM

I remember my gran always had pretty red geraniums in her porch.
Mum had lots too. I used to have a huge lemon scented variety in the UK, it had pretty pink flowers.

That is a really bright flower. I really like them. One year I had a whole bunch of zinnias and they made me happy to see them.

Beautiful geranium, such a vibrant colour.

I love bright red geraniums, when the sun hits them the colour is so intense isn't it! I have three on the steps leading to the door but even with diligently watering them they have suffered in the heat.